Voidwalkers (or void walkers)[1] are a type of void creature.[2] Large shapeless things in hues of blue and purple, they hover ominously.[3] Despite being fleshless, they do have souls.[4] Enigmatic and emanating pure demonic fury, a voidwalker is sometimes the last thing someone encounters before crossing over into death.[5]

Touching them has been compared to the burning feeling of frostbite, and their grips strong enough to crush bone into powder.[6]

Although they aren't demons,[7] they are sometimes referred to as such[8] and classified for gameplay reasons.[9] 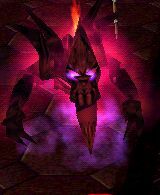 An Elder Voidwalker in Warcraft III: The Frozen Throne.

Voidwalkers first appeared in Warcraft III: The Frozen Throne as a type of Outland creep. Lorewise, they served little purpose other than being random monsters fought by Kael'thas Sunstrider, Lady Vashj and Illidan Stormrage when Illidan fled to Outland in order to hide from Kil'jaeden (after failing his task of destroying the Frozen Throne - he later failed it once more) and Kael'thas, accompanied by Lady Vashj, later went to look for him. The voidwalkers they encountered were however guarding Magtheridon's Dimensional Gateways[10] and his Black Temple,[11] which implies that they were either his slaves or soldiers. It was also possible to hire voidwalkers (and other Outland-creeps - even eredar) from a Mercenary Camp they found.[12] Voidwalkers are even more trivial in custom maps where they only guard random treasures and/or points of interest such as gold mines.

As seen from the picture, voidwalkers in Warcraft III look a bit different from the WoW ones. They are thinner, to such a degree that it's possible to see their ribs (although voidwalkers shouldn't have skeletons, as they're made of shadow), and are more similar to voidwraiths. Their heads are larger, and have large gaping mouths. Their bodies are also "pointier", having what seems to be spikes on the shoulders. They come in different colors depending on type; pink-purple ("Lesser Voidwalker"), blue ("Voidwalker"), purple ("Greater Voidwalker") and red ("Elder Voidwalker"). Voidwalkers in Warcraft III use frost and lightning spells, the Elder also being able to consume mana. The sounds they make resemble the growls of a lion, slightly "ethereal". 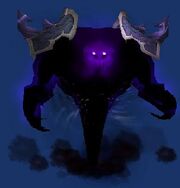 The rogue voidwalkers seen in places like the Warp Fields notably wear what appear to be pauldrons, and sometimes breast plates, as opposed to bracers. The reason for this, and any difference it may make on their abilities, is unknown. Perhaps the voidwalkers on Azeroth are "shackled" from their original plane, like elementals (this is confirmed in the non-canon RPG). It would explain the lack of bracers on the Outland-voidwalkers as Outland technically is in the Twisting Nether, and so they would not need them.

Voidwalkers are demons created from the chaos of the Twisting Nether. Their touch is misery, and it can momentarily blind a creature's awareness to other threats.

These hulking blue creatures look vaguely humanoid. It seems to appear from within a black cloud as dark as the void.

A voidwalker's sole purpose is to unconditionally serve a master. Thus, travelers rarely encounter them alone. The voidwalker is often a warlock's choice fel companion for its ability to intercept a single foe and keep him or her occupied. Many warlocks also prefer to do without the mischievousness of an imp or the jealousy of a succubus, preferring instead the unwavering, silent loyalty of a voidwalker.

Voidwalkers understand but do not speak Eredun.

A voidwalker does not hesitate to follow even the most suicidal commands its master gives. A voidwalker's master often sends it to block a threat, leaving the master free to cast spells or use other abilities without interference. A voidwalker takes its orders literally; when out of communication with its master, it continues to obey its last command, even if that command is tactically unsound.

The touch of a voidwalker brings a victim's most painful memories rushing to the surface; for a brief moment, she can think of nothing but destroying the source of this mental anguish. 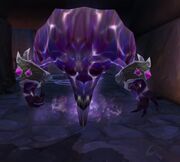 In Warlords of Draenor a new type of voidwalker appeared. These new variations appear rather different than the standard voidwalkers because of their lighter and more varied color. They are often categorized and known as elementals or aberrations. It is currently unknown whether these are simply new models for the common voidwalkers or an entirely new subspecies.