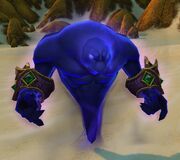 The Voidwalker is the second demonic minion available to the warlock, summoned through the

Voidwalkers are good tanks against non-elite mobs at or near the warlock's level; therefore, they are excellent for solo play. Although they can be used in at least low level instances as a substitute for a proper tank, due to their comparative fragility this is generally not advised.

Among the four regular warlock pets, the Voidwalker has the most health. 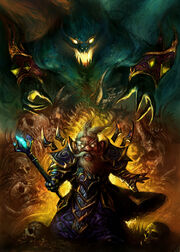 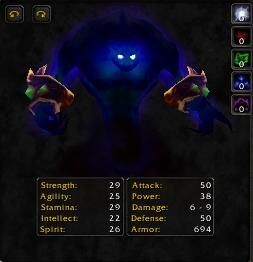 [Dark Pact] is a powerful strategy when being ambushed by another player or mob, giving you a shield that can absorb thousands of points of damage at a moment's notice.

Sadly, the Voidwalker does the least melee damage of any of the four regular warlock pets. Don't rely on it to kill the target with melee damage. Instead, put your DoTs on the mob, and maybe use some direct-damage spells as well, such as

[Shadow Bolt], but be sparing so you don't draw the aggro to yourself. The whole point of a Voidwalker is to absorb the mob's attention and damage so you're free to let your spells work, watch for adds, use

[Life Tap], bandage yourself, etc. See the strategy section of Curse of Agony for tips on how to effectively combine usage of DOTs with the Voidwalker.

Suffering provides plenty of threat, but sometimes if you start casting your DoTs/Direct Damage spells too early while soloing, the mobs will eventually ignore the Voidwalker and attack you, even if he has the aforementioned mode turned on. The key to avoiding this is to let the Voidwalker build up threat by ordering him to attack the mob and take off a bit of its health before you start casting your spells. If you let the Voidwalker smack the mob around until it gets to about 90-93 percent health and then start casting your DoT/DD spells, he'll generally be able to hold aggro for the rest of the fight. If you're destruction specced, you might want to wait a bit longer as destruction spells generate more threat than affliction spells. The Voidwalker will take more damage than usual if you use this tactic, but with ample use of

[Health Funnel] or perhaps commanding him to use Shadow Bulwark this shouldn't be a problem.

The threat generated has very limited use in PvP combat, but a Voidwalker isn't entirely useless. Suffering can be used to distract a pet belonging to another warlock or hunter while you focus on more important targets such as the warlock or hunter itself.

Because of its high health defensive abilities, the Voidwalker is likely to have a lot of health at any given time, making it the best pet to have around if you're going to use

The Voidwalker is summoned via

[Summon Voidwalker], which can be learned from any warlock trainer at level 8. Previously, the player was required to undertake a quest in order to acquire the Voidwalker. The below information describes this process, and is kept for historical purposes.

Per usual, the quest line begins with an NPC warlock near the trainers in one of each faction's major cities. When you reach level 10 as a warlock, go to any warlock training area for your faction (other than the level 1-6 starting areas) and there will be a quest for you, either starting you on the quest or directing you to the right person to talk to.

Alliance warlocks will be directed to Gakin the Darkbinder in Stormwind, either by Remen Marcot of Goldshire or Lago Blackwrench of Ironforge (to whom you may be directed by the gnome warlock trainers of Kharanos).

In either case, the quest giver will send you to retrieve a quest item from someone nearby, who will not part with it willingly, and when you return with it, the ritual begins. A trainer will then tell you to summon a Voidwalker somewhere nearby. You must defeat it to earn the power to summon one yourself again in the future. Others can assist, of course.

The blood elf quest requires you to fight your way into a village in the Ghostlands guarded by Quel'dorei Ghosts and Wraiths because there isn't a summoning circle in Silvermoon City. All in all, this quest is far more difficult than the other Horde versions. 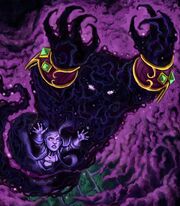 Yet another image of a gnome warlock with a voidwalker.

Voice overs when ordered to attack

Voice overs when ordered to cast a spell