“The vulpera are strong. We just need an opportunity to prove it.”

The vulpera (pronounced "vuhl-PEH-ruh") are a race of nomadic fox people that inhabit the deserts of Vol'dun on Zandalar. Intelligent and resourceful, they travel across the dunes in caravans and survive by scavenging and trading. Though long hunted and enslaved by the sethrak of the Faithless empire, the vulpera found the strength to fight back after being aided by Horde adventurers in Vol'dun and have now pledged their loyalty to the Horde.

Some vulpera can also be found across the sea,[4][5] most notably as members of the Bilge Rats pirate crew in Kul Tiras.

The vulpera have lived in Vol'dun as free traders and merchants for countless generations.[6][7] For much of that time, they have been oppressed by the Faithless sethrak, who have enslaved countless vulpera over the years and forced them to work and fight for them.[8][9] The vulpera are mostly a passive people[1] and as such never found the ability to stop the sethrak.[9] At least one caravan tried to fight back, but they met only with defeat.[8]

Vulpera in their heritage armor.

Near the start of the Fourth War, the vulpera Nisha formed a plan to take the fight to the sethrak. She warned her caravan leader Kiro that the sethrak would eventually attack and that the vulpera needed to make a preemptive strike against the snakemen, but Kiro insisted that the vulpera keep their heads down and continue to quietly do business. Not long after, a force of Faithless led by Fangcaller Sraka attacked the caravan at what is now the Abandoned Burrows.[1][10][11]

Shortly after, a Horde adventurer and a group of Zandalari trolls led by Bladeguard Kaja flew to Vol'dun to search for Kaja's missing superior Warguard Rakera and acquire her evidence that General Jakra'zet was a traitor to the Zandalari Empire. The group was shot out of the sky by the Faithless' ruler Emperor Korthek,[12] but the vulpera came to their aid: Kaja was found by Meerah and brought to the Vulpera Hideaway[13][14] while Nisha rescued the adventurer from Faithless captivity in the Abandoned Burrows and brought them to the hideaway as well.[15] After healing Kaja,[16] Kiro agreed to provide the outsiders safe passage through the desert in exchange for the adventurer helping the vulpera with some tasks. Kiro subsequently sent Meerah to retrieve some supplies from the Port of Zem'lan in the south in order to begin putting Nisha's plan into action, with Kaja and the adventurer accompanying Meerah to search for Rakera along the way.[17][18]

Kaja and the adventurer eventually found Rakera and—after crossing paths with Kiro and Nisha in Zul'Ahjin—joined forces with Vorrik and his Devoted, a faction of sethrak opposed to the Faithless.[19] Meanwhile, the vulpera traveled north, took over Vorrik's Sanctum, and began taking the fight to the Faithless, with Kiro and Nisha liberating vulpera slaves while Meerah organized caravans to carry them to safety.[9] Shortly after, Vorrik and the Horde adventurer embarked on a mission to kill Emperor Korthek and stumbled across the vulpera at the sanctum. Vorrik was initially surprised but concluded that his loa would approve of helping innocents in need and that the vulpera would be useful allies that could help distract the Faithless.[20][21] The adventurer subsequently joined Nisha in killing Faithless around the Crater of Conquerors and arming vulpera slaves to help them rise up against their oppressors.[3][22] While the freed vulpera marched through the trenches, sowing chaos,[23] Vorrik and the hero rode on the back of Rakjan the Unbroken to rain destruction down on the Faithless before landing in Skycallers' Spire and joining up with Nisha's forces.[24] They soon forced Korthek to emerge from his underground temple, and together, Nisha, Vorrik, and the hero killed the emperor.[25] Afterward, Kiro stated that the adventurer had proven themselves a true ally and would always be welcome in the caravan.[26]

At Camp Lastwind, a vulpera caravan led by Norah planned to become the first to successfully steal treasure from the undead pirates in the Port of Zem'lan. Adventurers were sent into the port to look for a missing vulpera scout but instead ended up helping First Mate Jamboya commit mutiny against the port's tyrannical ruler, Pirate-King Zem'lan.[27] With their arms full of stolen booty, Jamboya and his fellow mutineers then accompanied the adventurer back to Camp Lastwind, where they convinced Norah to let them join the caravan in exchange for helping them ransack the rest of the port's treasure.[28] Similarly, at the Court of Zak'rajan, adventurers helped a scavenging crew consisting of Kenzou, Omi, and Tacha defeat Zak'rajan the Undying and plunder his treasure trove of powerful artifacts.[29] In the southern parts of Vol'dun, the Ashvane Trading Company enslaved a number of vulpera and forced them to mine Azerite in the Redrock Mines. The vulpera Keerin tasked adventurers with liberating him and his fellow captives.[30][31]

The Horde later hired vulpera caravans to help transport supplies for their war with the Alliance. During the Alliance's assault on Vol'dun, the 7th Legion began incinerating the caravans in the hope of stopping the shipments and dissuading the fox people from doing any more jobs for the Horde.[32] Incensed by these attacks, Nisha asked Horde adventurers to defend her people and fight back against the Alliance invaders.[7]

After the Alliance killed the Zandalari ruler King Rastakhan during the Battle of Dazar'alor, Kiro attended the king's funeral and stated that the vulpera would do what they could to help the Zandalari.[33]

Baine welcoming the vulpera into the Horde.

With the Horde having shown them that there is more to life than mere survival, the vulpera eventually decided to join the faction in order to explore the world beyond Vol'dun. Kiro, Meerah, and Nisha traveled to Orgrimmar to speak with Baine Bloodhoof, but he was forced to decline giving them membership as troubles in the Twilight Highlands, Zuldazar, and Suramar had stretched the Horde's resouces thin and he could not agree to add new members to their ranks while their current allies were struggling.[34] The vulpera decided to offer their help in order to prove their worth to the Horde: Kiro traveled to the Highlands to quell a peon revolt near Crushblow, Nisha headed to Zuldazar to fend off an invasion by the Nazeshi naga, and Meerah journeyed to Suramar to get the nightborne's arcwine production back on track.[35] With the help of the adventurer, the vulpera were able to solve the Horde's problems, impressing Baine's allies.[36][37] When the three vulpera returned to Orgrimmar, Baine realized that he had been wrong to dismiss them so quickly and offered them a place in the Horde, which they gladly accepted. Thus the vulpera became allies of the Horde, giving them a home beyond the dunes.[38] 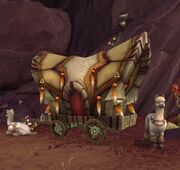 The vulpera are a keen and intelligent race of nomadic scavengers. They are capable of turning what they find into opportunities to thrive[39] and are skilled at solving problems, no matter their size.[40] Despite their small stature, vulpera are fierce and cunning in battle, bringing down any enemy foolish enough to underestimate them.[41] While they have permanent settlements in burrows, their caravans mostly travel from hideaway to hideaway, scavenging for supplies, trading them where they can, and spreading information they pick up along the way.[1][17][39] Their scavenging often takes the form of looting artifacts and treasure from ancient ruins and selling them to the highest bidder.[29][42][43] Dwelling in Vol'dun, the vulpera can't afford to waste resources. Over time, they have learned to take anything that looks even remotely useful and be creative using what they have,[44] and they have learned to recognize value wherever it hides in the desert.[45] When warned that gold from the Port of Zem'lan was cursed, Norah replied that "A little curse never kept the vulpera from a worthy treasure".[46] According to Keerin, vulpera generally stay away from Azerite due to its volatility.[30] However, at least some of the fox people only see Azerite fragments as "neat power rocks" and don't mind pocketing them.[43]

Vulpera show a knack for alchemy, using potions and elixirs for a variety of effects. Vol'dunshine is a type of vulpera-made desert hooch brewed during desert travel and stored in dried gourds.[47]

One of the various demigods that participated in the War of the Ancients was described as "a tiny red fox with a sly yet gnomish visage [scurrying] between the legs of the giants".[67] It may have been related to the vulpera.