Difference between revisions of "Vulpera (playable)"

This article is about the playable race. For the vulpera lore, see vulpera. For the in-game faction, see Voldunai. 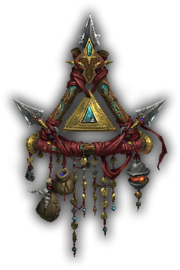 The vulpera are one of the playable Horde allied races in World of Warcraft, introduced in Battle for Azeroth. A desert-faring people native to the sands of Vol'dun, they were terrorized for generations by the sethrak empire until they received aid from the Horde. To commemorate this new friendship, the vulpera joined its cause.

Kiro acts as the leader of the Horde's vulpera, while the Vulpera Hideaway serves as the closest thing to a capital. They speak Vulpera as their native language and Orcish as a secondary language to communicate with their allies.

Clever and resourceful, the vulpera of Vol’dun have survived amidst the sands for generations. Eager to join the ranks of the Horde, their caravans have departed from the dunes in search of adventure.

The serpentine sethrak have taken to subjugating anyone they can as slaves, and the vulpera are an easy target for their machinations. If you’ve taken steps to liberate the vulpera from these overseers, they’ll join the Horde on the battlefield.[1]

Clever and resourceful, the vulpera of Vol'dun have survived amidst the sands for generations. Eager to join the ranks of the Horde, their caravans have departed from the dunes in search of adventure.

Kiro: We vulpera have always been resourceful. No matter the adversity, we do what it takes to survive... and keep our family strong. The Horde helped us when we needed it, and now it's time to return the favor. A fair trade, if you ask me. A whole world of adventure is awaiting you out there. Explore it and become a hero. For the vulpera... and for the Horde!

Players must then complete the following recruitment questline: