The Wailing Caverns is in the Northern Barrens, to the south of Crossroads, on the north side of the Lushwater Oasis. The Wailing Caverns is one of the first instanced dungeons that lower-level Horde players encounter. One primary reason to venture into the Wailing Caverns is for BoP drops from the numerous bosses in the instance. Some of the quest rewards are also highly desirable. Even the poor quality drops are better than ordinary; a stack of typical trash drops is worth around five to ten silver.

In years past, a night elf druid named Naralex discovered a network of underground caverns within the heart of the Barrens. Dubbed the 'Wailing Caverns', these natural caves were filled with steam fissures which produced long, mournful wails as they vented. Naralex believed he could use the caverns' underground springs to restore lushness and fertility to the Barrens - but to do so would require siphoning the energies of the fabled Emerald Dream. Once connected to the Dream however, the druid's vision somehow became a nightmare. Soon the Wailing Caverns began to change - the waters turned foul and the once-docile creatures inside metamorphosed into vicious, deadly predators. It is said that Naralex himself still resides somewhere inside the heart of the labyrinth, trapped beyond the edges of the Emerald Dream. Even his former acolytes have been corrupted by their master's waking nightmare - transformed into the wicked Druids of the Fang.

Years ago, the famed druid Naralex and his followers descended into the shadowy Wailing Caverns, named for the mournful cry one hears when steam bursts from the cave system's fissures. Naralex planned to use the underground springs to restore lushness to the arid Barrens. But upon entering the Emerald Dream, he saw his vision of regrowth turn into a waking nightmare, one that has plagued the caverns ever since.

Corruption continued to flourish in the Wailing Caverns since Naralex's awakening.[1] Some deviate critters had survived, and they were now growing and multiplying in numbers.[2] An adventurer went there to cleanse the caverns.

Azerite, the blood of Azeroth, flowed through the Wailing Caverns in tremendous quantities and was fought over by the Horde and Alliance.[3] Due to the Azerite, the animals of the Overgrowth were acting strangely.[4][5]

As powerful magic seeped through the Wailing Caverns that was transforming the Barrens, Alliance and Horde champions were sent into the Caverns in order to devise a way to leverage that magic. Musu Gentlemoon and Hannah Bridgewater were known participants.[6] 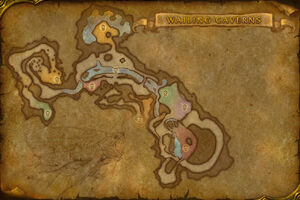 The following bosses are present in the Wailing Caverns:

The part of the dungeon before entering the actual instance is filled with 14-17 raptors, wind serpents, and oozes. This part is easy, just follow the path till you get to the instance. The one pool on the path that you cannot walk around is a minor trap with two threshadons. If you are doing

[18] Trouble at the Docks, the NPC you are looking for, Mad Magglish, can be found in three different locations. He can be hard to find as he is invisible (when you get close to him he appears and attacks you). Upon entering the cavern you will come to the first intersection (T shaped) where you can go left toward the instance entrance or straight to a small drop off. The small nook to the right is the first location where Mad Magglish may be found. If you can't find him there, proceed down the left passage toward the instance entrance. You will come upon a second intersection where you can go straight (to the instance entrance), go left or go right path. Both the left and right passages lead to a dead-end. You may find Mad Magglish in either the left or right passage (his camping area or the blind alley).

When you enter the instance take the quests in the entrance and then continue to follow the path killing all in your way until you reach a large cavern area - Screaming Gully. Be warned - the raptors will call for help when almost dead. In this room is one of the four Fanglords, named "Lady Anacondra". Kill any mobs Lady Anacondra has with her, and then focus on her. Lady Anacondra often drops

[Serpent's Shoulders] and is near the entrance, and is well worth farming just for that item.

The Druids of the Fang deserve a special mention, they'll engage first with lightning bolts, and then shapeshift into Cobras to engage in melee. When heavily damaged, they'll morph back to heal themselves. Each Druid of the Fang is also capable of putting a party member to sleep. If you have a shaman, tell him/her to use a Tremor Totem whenever someone's asleep, and use

[Wind Shear] to disrupt a druid's initial lightning bolt to force them to charge. Also save a

[Counterspell] for their final heal. The same technique can be used to fight each of the Leaders of the Fang. Deviate Shamblers later can cast regeneration on themselves, purge utterly counters this.

After Lady Anacondra, you can either go to the east or west along the river. Jump down into the water and head west. Somewhere along this river, you'll meet a turtle called Kresh. He wanders around in the waters that run through the dungeon. Kresh is a non-aggressive turtle and no tougher than any of the normal elite mobs. He drops a really nice blue shield (

[Worn Turtle Shell Shield]) or can be tamed by a hunter. Killing Kresh is not necessary to complete the instance, and you can ignore him. Climb the circuitous path up from Kresh's pool. Once you have traveled up the path you will find yourself in a big room filled with random monsters. Just follow the path and clear the monsters. Most of them are easy to kill, but be careful of additional monsters who wander around. After defeating the monsters you will find Lord Cobrahn, another one of the four Fanglords. Lord Cobrahn may drop

[Robe of the Moccasin]. In the same area you will find Lord Pythas, another one of the 4 Fanglords. Pythas is the toughest of the Leaders of the Fang. He puts out a lot of melee damage, and he has a lot of hitpoints.

Jump off the cliff, you'll return to the main room and go east. The Deviate Faerie Dragon is a rare mob you may encounter in this area. Not difficult, drops nice caster gear, but appears rarely. Odds are good that you will never see him unless you enter the instance repeatedly to hunt for him. The next (optional) boss along the path is "Skum", a big old thunder lizard. Skum generally won't cause you any serious problems himself, but in addition to the two druids guarding his pen, there are usually a number of other druids, dreadfangs, and oozes nearby, which you may want to remove before killing Skum himself. Skum drops a semi-good dagger,

[Glowing Lizardscale Cloak] so if you have any rogues or hunters you may as well drop him. Eventually you will find a big room with "Verdan the Everliving" and "Lord Serpentis". Serpentis is a very standard melee fighter for the most part, with less hit points than Pythas. Kill any of the random mobs around Serpentis first, don't let him get past your tank(s), and don't get near and aggro Verdan the Everliving, and you should be fine. Verdan the Everliving on the other hand is a very different story. Killing Verdan is optional, he is not the object of any quest. 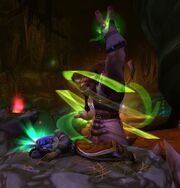 After you've killed all four Leaders of the Fang, go back to the entrance and speak with the tauren druid Muyoh to start the Naralex event. You'll have to escort the Muyoh through a path of mobs to wake up Naralex. Even if you cleared the path, there are two set points along his path at which mobs will spawn; dispatch them when they appear. None of these are particularly difficult. When you reach Naralex, Muyoh will begin to wake him. You must continue to protect the Disciple while he wakes Naralex. A few waves of mobs spawn, serpents, then slimes, that can be easily dispatched. You get enough time to eat and drink between waves of mobs, if everyone stays on the island and deals with the current wave quickly enough. The last spawn is the boss Mutanus the Devourer, a huge murloc. You won't have a long rest before him, Mutanus comes up rather quickly, but you should be able to get everyone's health and mana restored. Mutanus can be tough depending on who you have in your party.

[Deviate Hatchling] is a very rare drop from the Deviate Ravager and Deviate Guardian raptors inside the Wailing Caverns.

Starting with patch 7.2.0, the Wailing Caverns are also home to a special solo scenario for the Pet Battle System called Wailing Critters.