War of the Satyr

At least part of the war was fought on Ashenvale. The satyrs were helped by demons that had somehow lingered on Azeroth after the defeat of the Burning Legion. The night elves were directed by Malfurion Stormrage, Tyrande Whisperwind, and Shandris Feathermoon. The night elves Ralaar Fangfire, Belysra and Arvell fought in the war. The former two created the worgen during the war in order to combat the satyrs, by enhancing the pack form.[3] Naralex and Fandral were present and agreed when Malfurion created the Cenarion Circle to prevent further misuse of druidism.[4] Mel'Thandris, the aunt of Velinde Starsong, sacrificed her life to save her fellow night elves in the final battle.[5]

The ensuing War of the Satyr exacted a heavy toll from the night elves, but ultimately they vanquished the forces that had set out to wreak havoc on their world. The war completely decimated any semblance of central leadership for the satyrs, forcing them to live in small sects to this day.[6]

Return of the satyr

After the War of the Ancients, night elf society returned to nature, and many became druids. As changes to night elf society took shape, an old foe was gathering strength in Kalimdor. The remaining satyr stayed hidden in the dark corners of the world, waiting to strike back at the night elves. Eventually, one of the horned aberrations, Xalan the Feared, gave his brethren this chance. He rallied the satyr and girded them for war. Xalan's rise also drew the attention of the Burning Legion remnants trapped on Azeroth after the Sundering.[2]

The satyr drew upon mighty allies; other demons of the Burning Legion who had yet lingered years after the War of the Ancients, polluting Azeroth.[7] Doomguard and other wicked beings, such as Felhounds and Felguard,[1] emerged from the dark warrens, drawn to the satyr's call.[2]

As one, this demonic army launched its first brutal assault on the night elf stronghold of Night Run, plunging the fragile society into another war.[2] The night elves of Kalimdor faced, once again, the cruel reality of conflict; bloodshed, death, and deep, terrible loss. Armies of satyrs - calling themselves Soldiers of the Emerald Flame - burned with an unquenchable vengeance for their fallen father, the satyr lord, Xavius. Ashenvale was ablaze with their destructive fel magics as they struck with but one goal; the utter destruction of kaldorei civilization.[7]

The kaldorei fell the satyr trap, and retreated.

The night elves suffered terrible losses from the satyr's assaults, and Tyrande's adopted daughter and captain of the Sentinels, Shandris Feathermoon, proposed a new strategy to fight the demons. She suggested that the druids be called from their sojourns in the Emerald Dream so they could be used as a fighting force. Upon seeing how Xalan had corrupted the night elves' forests, Malfurion agreed to Shandris's request and summoned the most powerful druids of Kalimdor to his side. As one, the druids and Sentinels struck into the heart of satyr territory. Shandris's brilliant guerrilla maneuvers led the night elves to overcome many of their enemies.[2]

The satyr and kaldorei armies clashed again not far from Raynewood Retreat. The druids used a variety of magic and forms against the satyr. Malfurion brought the light of Elune down on a group of satyr, calling them traitors. The young druids Ralaar Fangfire and Arvell were close as brothers, and though they bickered over a Felguard, they then worked together to defeat it. Arvell called forth vines to entrap the demon, giving Ralaar the time needed to take bear form and slay the demon. As the battle ensued, the two rushed as well to save Arvell's lover, Belysra Starbreeze. As more felguard came from the high ground, it became clear the kaldorei had fallen for a trap and were forced to retreat. Those that survived retreated, bruised and beaten, to Raynewood.[1]

The War of the Satyr had taken its toll on the kaldorei, still struggling to reshape their ancient culture after the Sundering. Despite this, it was a time of innovation among druids, who had a passion to experiment and practice new forms. Thus, when Malfurion began to restrict which forms were to be used in battle, he was met with resistance from his students, including Ralaar Fangfire.

After the retreat, the kaldorei planned retaliation. The plan was to strike at the heart of the satyrs in Xavian; a covert assault to kill their most successful general - Xalan the Feared - and his elite guard. It was a two-pronged strike. Shandris Feathermoon spearheaded the sentinel assault to slay the felguard's commanders while Ralaar and Arvell lead their own effort. Ralaar killed the Satyr leader, Xalan the Feared.[7]

Arvell and Belysra discovered the satyr stronghold and were ambushed, and Arvell died rather than protect himself with the Pack Form.[7]

Druids of the Scythe 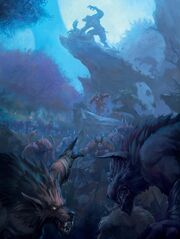 Led by Ralaar Fangfire, these druids became known as worgen. Ralaar and his ferocious companions were slaves to their own rage, and they tore through friend and foe alike amid battle. Night elves bitten by the wolf-beasts contracted a virulent curse that transformed them into worgen as well. The worgen catastrophe forced Malfurion to reflect on the state of druidism. Without some form of regulation, he concluded that individuals like Ralaar would inevitably go too far in their application of druidic power. Malfurion and his followers, therefore, created the Cenarion Circle, a harmonious order that would guide and keep watch over the world's druids and their practices. The Cenarion Circle's first great task was to deal with the worgen threat. Seeing no other recourse, Malfurion reluctantly banished Ralaar and his worgen to the Emerald Dream. There, Malfurion believed that they would enter a peaceful eternal slumber beneath the enchanted tree known as Daral'nir.

After the worgen's banishment, any hope the satyrs had of achieving victory was lost. The night elves cut deep into their enemy's domain until most of the forests had been cleansed of corruption. The few remaining satyrs retreated into the shadows. Never again would they pose so great a threat to night elf society.[2]

After the war, some druids came to believe that at their core they were wild creatures, their humanoid forms merely a guise. They left night elf society for a forested island and were not seen for thousands of years.[8]

Thousands of years later, the worgen - including Alpha Prime - would escape their imprisonment in a variety of ways. Firstly, Genn Greymane of Gilneas ordered Archmage Arugal to summon the worgen to defend the Greymane wall from the Scourge, unknowingly releasing Alpha Prime as well, who started a Wolf Cult in Gilneas.[9] Secondly, Velinde Starsong of the Sentinels uncovered the Scythe of Elune in Ashenvale, and summoned more worgen to defeat the satyr in Felwood.[5] Thirdly, she traveled to and died in Duskwood shortly after,[5] where Jitters of the Defias Brotherhood found the scythe and inadvertently summoned worgen to Duskwood.[10] In addition to these three packs - the Bloodfang, Terrowulf, and Nightbane respectively - some worgen awoke from their slumber in the Dream and did battle with the satyr of the Nightmare,[11] while others wandered the dream as a pack, and split up when they arrived in Val'sharah.