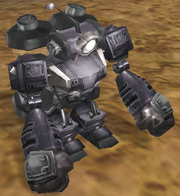 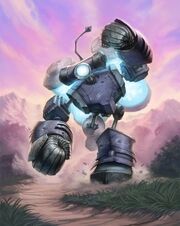 A Warbot in Hearthstone.

Warbot Ignition Key teaches you how to summon the Warbot companion. Filling it with

[Red War Fuel] will cause it to fight nearby Warbots filled with the opposing color.

Players in the United States who signed up for the Choose Your Side promotion[1] got this item (a Wonderworks toy) mailed to them by Jepetto Joybuzz. This item is still mailed to new characters on an account that has already signed up to receive it.

You are now the proud owner of a cunningly-crafted Wonderworks orginal: the Warbot!

Be sure to keep your pint-sized pugilist filled with fuel for maximum fun. But remember; Color's the same, All will be tame; Red plus blue, A fight will brew!

Those who did not sign up for the promotion were unable to obtain the item until patch 5.0.4, which made it available for 500

from toy vendors (see below).

A fighting robot fueled by delicious red or blue electrolytes.