Warbrave Oro first appears at Krasus' Landing in Dalaran to request aid for the Highmountain Tribe. He later journeys to Riverbend in order to help defend it from the drogbar attack, but when Dargrul uses the

[Hammer of Khaz'goroth] to destroy most of the village, Oro is caught in a stone fist and has to be rescued by the player.

Shortly afterwards, he leads a group of warbraves in an attempt to kill Dargrul while he is in Bitestone Enclave, but the entire group — with the exception of the player — are killed when Dargrul uses the hammer to impale them on earthen spikes.

Oro's family lives at Oro's Overlook south of the Sylvan Falls in southwestern Highmountain. After his death, his wife Kura says that she knows Oro would not want her to lose herself in grief, though Oro Junior, the younger of their two sons, appears to not yet be aware of his father's death.

A memorial note for Oro can be found at a shrine in Snowblind Mesa following his demise.

After his death, Oro's soul traveled to Bastion and can be found in the Aspirant's Crucible. When spoken to, he expresses his hopes that his family is well and states that his fate and that of Dargrul are now the concerns of a past life.

Oro after being killed by Dargrul. 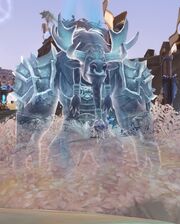 Riverbend
I heard what you did for the Rivermane tribe.
When we first met in Dalaran I did not expect that you would be as helpful to us as you have been.
It is much appreciated.

Aspirant's Crucible (if the player has not completed

[100 - 110] Dargrul and the Hammer)
Ah. Another soul from Azeroth.
No, not a soul. The light of An'she still warms your flesh.
Would that I could set eyes upon Highmountain one last time. If the Earthmother wills it so, my family still abides there.
Many here are impatient to ascend and haunted by past regrets, but I am content to enjoy my memories of those I love. I hope they think well of me, though one day I must let them go.
But not today. No. Not today.

Aspirant's Crucible (if the player has completed

[100 - 110] Dargrul and the Hammer)
I know you. We fought side by side in Highmountain. You seem no worse for wear.
I hope Kura and the boys did not spend long in mourning, and that Kura is loved. But still, I wish to keep some memories. Nuzzling Kura. Naming Junior. Teaching Mycah how to move with the knife like a ghost. Like a ghost--
I do not remember what fate befell me. Only that it was quick. What became of Dargrul?
No. No, do not tell me. That is the concern of a past life. This anger, this pain--this is why the kyrian unburden us from our memories.