For the novel, see Lord of the Clans.

Warcraft Adventures: Lord of the Clans is the defunct, dark, comical, adventure game that Blizzard began production on soon after Warcraft II was complete, though they kept news of its existence from the public for quite a while. It was originally announced on March 17, 1997.[3]

It was an adventure game in the same style as Monkey Island and other classic LucasArts and Sierra adventure games. The graphics were all hand-drawn and cel-animated and then scanned into the game. It was not produced in-house by Blizzard, though Blizzard artists were consulted.

The game had the tagline "An Adventure Game in the World of WarCraft", but it was canceled before completion on May 22, 1998.[4] 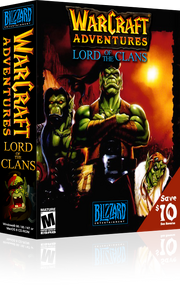 American company Animation Magic located in Cambridge, Massachusetts was out-sourced due to their experience in classical two-dimensional animation to produce the twenty-two minutes of fully-animated sequences, the game's artwork, the coding of the engine and the implementation of the sound effects. Blizzard then provided all the designs, the world backgrounds, sound recording and ensured storyline continuity.

The game was ultimately canceled when Blizzard decided that, while the story and graphics were great, they felt the gameplay was severely lacking. Rather than publish a mediocre game, they chose to cancel it.

When Warcraft Adventures: Lord of the Clans was canceled, it had been in development for over a year and was almost complete. Nearly all features, puzzles, and areas were in place, and the voice acting had been recorded. Another round of development, involving the implementation of new puzzles, tweaked areas, and more recording, was about to start before E3, in May 1998, but before that could happen the game was canceled.

The storyline was far too important to disregard, however, as it set the stage for the entire Horde campaign in Warcraft III: Reign of Chaos. Star Trek novelist Christie Golden was then hired to write the novelization based on scripts and outlines provided by Warcraft universe co-creator, Chris Metzen, and had to be completed within six weeks. The book was released under the title Lord of the Clans about a year prior to Warcraft III.

Three great wars between the human Alliance and the orcish invaders have laid waste to the once proud realms of Azeroth. Twenty-two years have passed since Blackmoore found the young orcling. Secretly raising the orcling within the confines of his prison fortress Durnholde, Blackmoore planned to mold the orcling into the perfect warrior. A warrior conditioned to human thinking, but with all the savagery of an orcish heart. - Drek'Thar, Warcraft Adventures: Lord of the Clans trailer.

"Basically, after the Dark Portal was destroyed and the rift between the worlds was destroyed, you had a large group of orcs that were trapped on Azeroth. And over the course of the next few years, the humans, being merciful in their ways, instead of hunting down and eradicating these orcs, granted them land areas where they could live as long as they lived within the confines of societal expectations. Basically, they were put on these reservations or camps. And because they were made to live in a way that was very contrary to their basic nature, a lot of the spirit and fire that defines them as a culture was drained out of them. And so what you found yourself with was an orc society in Azeroth of forced passivity, not forced through violence but forced through the situation.

Although down on their luck, the orcs in Warcraft Adventures were supposed to experience a rebirth, thanks to the leadership of Thrall.

Our storyline followed an orc baby that was taken from a battle scene where his parents were slain and raised by a human lieutenant, Blackmoore, with the intention of raising him with human ideals but being able to use him to control the orcs. Definitely, someone who does not fit into the general stereotype of noble humans. He was a self-serving, dark human character who wanted to raise this orc, Thrall, our central character in the game and use him to control and command the orcs and then raise them as his own private army. Thrall, though he's raised in captivity by humans to serve their will, still has some fire within him that he can't deny, so he rebels against his human owners. He escapes the compound where he's being held, and then over the course of the game, what we do is follow his adventures. As he discovers more about himself and the orcs and what it means to be an orc, so does the player. As you go through the game, you meet some familiar faces from the games, some in retirement, some trying to lead an underground resistance, and you learn of what happened to the Frost Wolf Clan, which was the clan that Thrall's father Durotan was a part of. You learn that Durotan, Blackhand and Doomhammer were three blood brothers, and that his clan Frost Wolf was sent into the Dwarf Highlands in the mountains. They were exiled there by a plotting Ner'zhul, when he was pulling the strings in the background behind Doom Hammer and Black Hand, because he knew that Durotan was a threat.

So you find your heritage and then take up the banner of the Frost Wolves to regroup the orcs and lead them in a rebellion against Blackmoore and these humans that are, at least in your mind, enslaving your people. The payoff, in the end, is that you're able to storm the castle, lead your horde to victory, and reclaim that birthright of the orcs. That was our overarching storyline in a nutshell. And of course, there were tons of other weird characters you meet along the way and interact with." - Bill Roper[5]

Differences and similarities to canon

Warcraft Adventures original creations that were referenced to in official canon

Warcraft Adventures original creations that were not added to official canon

The game took place in seven locations around Lordaeron, Khaz Modan, and Azeroth. These locations were based on the Warcraft II Eastern Kingdoms map.

The first and last area of the game, located to the south of Alterac. It contained several prison cells, a small chapel and a sizeable garrison.

In the outskirts of Durnholde the following elements could be found:

An orcish reservation located to the west of Dun Modr. The area was also called "Badlands" in design docs.

Inside the reservation the following elements could be found:

An area in the mountains between Lordaeron and Alterac. The region was also known as the "Dwarf Highlands" in interviews,[5] and as the "Northlands" in design docs.

In the valley the following elements could be found:

A gryphon aviary to the northeast of Tyr's Hand. The area was protected by several Wildhammer dwarves and Thrall had to magically transform into a dwarf himself to go there.

In the surrounding area the following elements could be found:

It is worth noting that on the early maps for World of Warcraft Northeron was situated approximately in the same area, even closer to Quel'Thalas than present-day Hinterlands.

A ruined Old Horde base from the Second War. It was said to be in the Badlands of Khaz Modan.

In the surrounding area the following elements could be found:

Alexstrasza's cave was situated on a rocky beach at Crestfall. Several shipwrecks were around, as well as a few scattered dragon scales.

Blackrock Spire and the surrounding area made an appearance as being the lair of Deathwing. The dragon lived in the upper spire, and the great gates of the fortress were blocked by thorny vines, which Thrall destroyed with the Death and Decay spell. Cows were kept nearby in order to feed the black dragon by his troll servants. The trolls had mottled and grey skin instead of being green. 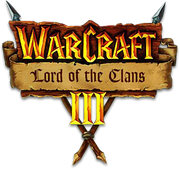 Irvine, CA, March 17, 1997 — Blizzard Entertainment announced today Warcraft Adventures: Lord of the Clans, the pivotal next chapter in the epic Warcraft saga. The fantasy adventure game, which is expected to release this holiday season, is the continuation of the Warcraft story and sets the stage for future Warcraft titles.

Warcraft Adventures: Lord of the Clans picks up where Warcraft II: Beyond the Dark Portal ended and develops many of the popular characters and locations first introduced in the Warcraft real-time strategy series. Players return to the land of Azeroth as Thrall, a young virile orc robbed of his heritage after being raised in servitude by humans. Destined to reunite and lead the disbanded orcish clans, Thrall must escape the humans' shackles and return the Horde to dominance.

Said Allen Adham, president and founder of Blizzard Entertainment, "With Warcraft Adventures: Lord of the Clans, our goal is to recapture the elements that make adventure games great. Players will be immersed in the world of Warcraft with a rich storyline, character interaction and extensive exploration."

"The adventure game tells an important chapter in our overall vision for the Warcraft story. For the first time, players will interact with the Orcish Horde, and learn about their history and motivations. The game adds to the depth of the Warcraft universe and provides the back story for future titles."

Key features in the game include:

Warcraft Adventures: Lord of the Clans is expected to be available this holiday season in Windows 95 and Macintosh CD-ROM format at most computer and software retail chains nationwide for approximately $50. The game will also be available directly through Blizzard at 1-800-953-SNOW. This game, as well as other Blizzard titles, is distributed by CUC Software.

Warcraft Adventures in the list of Blizzard's canceled games at D.I.C.E. Summit at 2008.

Within hours of the announcement of the cancellation, fans of the series formed an online petition, demanding the project be resurrected. On the 22nd of May 1998, Blizzard responded via their website;

Blizzard wants to take a minute to respond to the Warcraft Adventures petition that is circulating on the Internet. First, we want to express our gratitude to the Warcraft fans that took the time to organize such an effort. We recognize that the cancellation of Warcraft Adventures has disappointed some of our customers, and we appreciate that they have shared their opinions with us.

Secondly, we want to let you know that stopping development was not a decision that was taken lightly. It was a hard call to make, but each of us knows that it was the right choice. The cancellation was not a business or marketing decision or even a statement about the adventure genre. The decision centered around the level of value that we want to give our customers. In essence, it was a case of stepping up and really proving to ourselves and gamers that we will not sell out on the quality of our games.

And finally, we hope that Warcraft fans will consider our track record and trust our judgment on ending the project. The cancellation of Warcraft Adventures does not signal the demise of Azeroth. We have every intention of returning to the Warcraft world because there are still chapters to be told. We will keep you informed as we announce future Warcraft plans.