This article looks at the general physics evident in the Warcraft games. Some of the examples can be traced to gameplay restrictions, and the info given here should not be taken as the exact workings of the Warcraft universe. 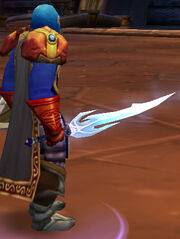 Some objects defy physics, such as the Phantom Blade.

Conservation of momentum is not always perceivable in the games. When a large object collides a smaller object, the smaller object can remain relatively stationary.

It's possible that some magical beings could move without the need to push on any form of physical matter. Titans for example move through the empty space of the Great Dark without any visible form of propulsion. The undead Liches float above ground, but whether they magically conjure propulsion or solely rely on magical energies is unknown.

Outland consists of land masses floating within an alternate realm of existence. However, the gameplay mechanics only allow a unidirectional gravitational force, meaning one can fall off of these land masses, instead of being able to walk or climb over their every surface.

Matter can be transformed into other types of matter through magic. Alchemists for example, have the ability to transmute raw materials into others. 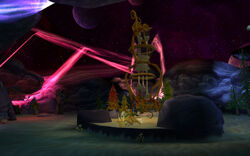 The sands of time move through an hourglass.

In the Warcraft universe, beings can travel forward or backwards through time and have the ability to change history sometimes. In the Burning Crusade, beings can travel through time to battle Archimonde but their deeds will not affect later outcomes in history. This follows one theory, according to which traveling through time is equal to traveling to a parallel universe, with its own timeline. Before travel, it would have not existed, as it was the same as the universe the time-traveler left. Traveling back in time creates the universe, following the timeline up to the point you travel to, before branching off to create a new timeline after intervention. Because it is an alternate universe, the effects have no impact on the universe of departure.

Medivh explained two different theories of time to Khadgar while he was his apprentice. One followed the most common idea of a sequential series of events, while the other was one of a predetermined history. He used the comparison between a clock and an hourglass as a metaphor to explain himself.[1] If time works like an hourglass, all the events in time are there, what order in which they are determined (passing through the sand timer) is random, but that which we experience and see will appear to be in order, and still have the same outcome.

There are two methods for this, divine and logical predetermination. With the former, a powerful being (possibly a titan) plans out a course of time, which it will purposely keep in check. This is similar to the concept of fate destiny. The latter is a more complex idea, where causes and effects are more predictable, thus the future is already known. However, even if they are not predictable, it is also possible for history to already be written, but the order of the events simply fall into place. Both theories share the idea that nothing people do can change the future, they need only play their part to lead up to it.

A predetermined timeline, logical or divine, seems likely with the existence of a giant sand timer inside the Caverns of Time which controls the flow of time.

All known planes of existence have three physical dimensions or more. In no known dimension do its inhabitants flatten out (2D) or become lines (1D).

Spirit Healers gather lost souls and give them form to run back to their bodies.

Bodies are moved by souls or magical means. Upon death, beings are turned into souls. These souls can inhabit different bodies and control them. For example, Sargeras co-inhabited Medivh's body with Medivh's soul and both fought for control of his body. These souls probably cause beings to move (or infuse the being with the will to move) because without them beings have not been seen to move unless they move by magical means such as golems.

Night elf players souls in WoW appear as wisps, cloud-like sphere apparitions of ancient forest spirits, unlike regular souls of the mortal races. Again, this may be a personal projection, as NPC night elf souls have typically appeared like the other races.

Like physical beings, souls can be trapped (see: Malfurion in The Well of Eternity). Souls are different from ghosts who can have a profound impact on the world. The difference between souls and ghosts is not known.

Sometimes souls can be reattached to the former body, and new soul take control of other body.