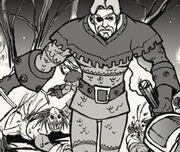 Watcher Dodds is a level 29 quest giver located in a small camp by the big crossroads in the human-aligned territory of Duskwood. He wants the giant spiders of Duskwood culled.

Note that the character is not named but strongly resembles the man.

Once, Lieren, Loania, Kardan and Voldana visited a house near the town of Darkshire only to be attacked by ghouls. Watcher Dodds and his soldiers killed the ghouls and accompanied them to Darkshire in order to get more information about their mother, Adena, from Commander Althea Ebonlocke. The commander told them that Adena was dead and Dodds took them to Adena's grave in Raven Hill. While they were heading there, the group saw undead who were heading to Darkshire. Dodds told the twins what direction they need to continue and he himself returned to Commander Ebonlocke to warn her about the approaching undead. Dodds returned shortly after with his men only to found those undead battling with the twins and the elf and dwarf.[1]