This article is about water elementals in general. For other uses, see Water Elemental (disambiguation).

To keep Azeroth safe from these threats, the titans imprisoned the Old Gods underground and banished the savage elementals to the titan-constructed Elemental Plane, a secure dominion where the elementals could dwell without harming Azeroth. Four domains were created within this primordial realm to serve as ideal environments for each type of elemental. One of the Elemental Plane's domains, a vast ocean known as the Abyssal Maw, is home to the water elementals.[1] With the elementals' departure, nature calmed, and the world settled into a peaceful harmony.[2] 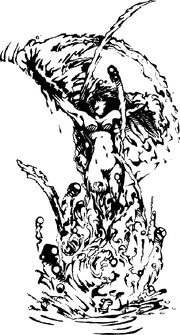 A female water elemental in the Warcraft: Orcs & Humans Manual..

The Kirin Tor classifies this spell under Conjuration, the study of magically creating creatures and objects. This art was born when a few daring wizards attempted to summon water without remembering the glass. Water elementals are a wizard's best friend. A summoned elemental is a formidable ally in combat, a great listener, and they even taste great![3]

The caster uses the forces of nature to create a water elemental. He summons the forces of air and water and combines them into a simulacrum to defend the lands. They are excellent creatures, and will never turn upon their creators. The element of water was chosen because it is persistent as in the state of erosion, and it is the opposite of fire, which seems to be the element that the Orcs favor.[4]

These creatures are made of the magical essence of water. Once created, they are loyal servants, and will unerringly do the bidding of their masters. Should they escape the control of their master, they become free creatures to do as they will. They are excellent fighters and will defend those whom they serve to the death.[5]

These are creations of Human magiks. Occasionally found in the service of their Conjurers, these simulacrums have the powers of water to use as they will. When found uncontrolled, they prove to be difficult to disperse, as they gain some semblance of independent thought and motivation. In either case, these elementals will attack until they are destroyed or their foe is dead.[6]

By use of this spell an Archmage can summon and control a powerful elemental composed of water and air vapors. These creatures, capable of hurling torrents of rock-solid water at their enemies, cannot remain in the physical world for long. Thus, after a short length of time, they will vanish and return to their base liquid forms.[7]

These mindless, hulking forms of water can take massive punishment from enemy units while delivering tremendous blows in return. Water elementals were a favorite tool of the Conjurors of Azeroth during the First War, and now the enchanted creatures have come to aid the defenders of freedom once again.[8]

The water elementals served their masters well during the Third War, defending and later avenging Dalaran and the Kirin Tor. The most notable of these Elementals was the one summoned by Jaina Proudmoore, who seemed to have an almost developed personality and acted as a more permanent bodyguard.[citation needed]  Countless Undead were felled in Lordaeron by this elemental, and it had a fair share of demon-bashing at the Battle of Mount Hyjal, facing the likes of Rage Winterchill, Azgalor, and Anetheron.

After the destruction of Dalaran, enraged and berserk elementals were roaming the ruins of the city, indicating they turned loose after the deaths of their masters.

There are several wizards who have chosen to follow the refreshing path of conjuration. Captain Balinda Stonehearth is a fine example of a mage who has chosen to adapt conjuration magic for battle. Perhaps the most famous conjuror is Nielas Aran who is noted for being able to summon several elementals at once.[3]

The Hydraxian Waterlords led by Duke Hydraxis were Water elementals that made their home on the islands east of Azshara. Duke Hydraxis revealed that the Elementals of Water are seeking to do battle against the other elements, and were willing to let mortals prove themselves to be worthy of fighting one of their grandest enemies, Ragnaros the Firelord and his servants in the Molten Core.

The Tribunal of the Tides sent Tsunaman to wage war against the fire elementals in Stonetalon Mountains.

A force of elemental scouts was sent to the Eastern Plaguelands of Lordaeron, but the disease of that place twisted and infected them.[9]

Because of the stresses on the land from the Scourge and the deaths of the Drakkari loa, the wall between worlds weakened and water elementals flooded the Drak'Sotra Fields in Zul'Drak.[10] The Drakkari ice trolls attempted to send shaman to control the elementals, but their efforts were thwarted by adventurers allied with the Zandalar tribe.[11] While summoning water elementals to fight the Scourge, the trolls of Zul'Drak also inadvertently created tiny water wavelings.[12]

Following Deathwing's Shattering of the World Pillar in Deepholm and his destructive re-emergence into Azeroth, the Elemental Plane collided with the physical realm and resulted in drastic geographical upheaval, causing chaotic elementals to pour out into the world of Azeroth. Unlike Ragnaros and Al'Akir, Neptulon did not ally himself and his Water elementals to Deathwing. Neptulon makes his first appearance during the

[30-35] Defending the Rift quest for both factions where he and his minions battle the naga who are attempting to invade his domain through the Abyssal Breach. He clashes with Lady Naz'jar and appears to gain the upper hand over the sea witch until Ozumat is called and attacks the Tide Hunter. Neptulon retreats into his realm, pursued by the vast naga forces where the fight continues on the elemental plane.

After the fall of Theramore, Jaina Proudmoore used the Focusing Iris to create and enslave many water elementals. She bound them into a huge wave with the intent of destroying Orgrimmar. The enslaved elementals cried out to Thrall in a vision, asking for help. Thanks to Kalecgos, Jaina realized the horror of the genocide she was about to commit. She instead used the elementals to rescue the Alliance navy from a Horde fleet and their krakens in Bladefist Bay.

As a mage minion

Frost mages are able to summon a water elemental as a minion.

A water elemental is a muscular humanoid formed from glimmering blue-green water; polished brass bracers encircle its hefty arms and two glowing blue eyes shine from a featureless head. Its torso trails off into a vestigial whirlpool. Some water elementals have become corrupted, appearing green instead of blue. Water elementals, perhaps the most versatile of all the elementals, possess strong arms, quick reflexes, and hearty constitutions. Enemies fear them, for water elementals possess devastating slam attacks, numbing blows, and the capacity to form powerful whirlpools. They are also the most secretive. Many have never seen daylight and dwell near ocean wrecks and forgotten cities. Human archmagi preferred summoning water elementals over all other elementals during the Third War. Of all the elementals, adventurers are most likely to succeed in diplomatic overtures with water elementals. Water elementals rely on their vortex as a primary attack and then switch to melee combat as appropriate. They focus their numbing blows on a single target, hoping to neutralize one threat before turning their attention to other combatants.[13] They speak Aquan.