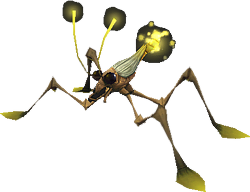 "Normally bugs are for bait, but how could you look into its eyes and even think that?"
-Nat Pagle[1]

Water striders are large water-bugs that make their first appearance with the World of Warcraft: Mists of Pandaria expansion. Water striders serve an important role in Jinyu culture, acting as a mount, means of sending communications, and even a family pet.[2] They seem to be drawn to still water,[3] and glow the brightest during spring.[4]

When preparing to travel to distant locations, Pandaren will traditionally capture a mirror strider and safely relocate it to another body of water.[5]

Only hunters that chose the Beast Mastery specialization at lvl 69 can tame these exotic beasts. What makes these pets unique, is that they are capable of casting

[Surface Trot] (a version of

[Water Walking]) on itself and the hunter.

Spore walkers may also appear as water striders, to increase the amount of looks for this family type.