Not to be confused with Wavestrider Beach. 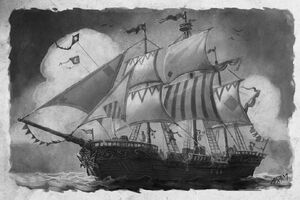 The Wavestrider was an old trading ship converted from a small frigate and captained by Greydon Thorne, traversing Azeroth, landing in Alliance, Horde and neutral ports. She was a hundred feet long, had three masts, an iron bell, and its own dinghy but no cannons.

The Hidden attack Greydon Thorne and the Wavestrider.

The crew was formed 4 years before the ship's destruction, two years after Greydon left his family in Lakeshire. Its crew consisted of 30 members and almost everyone had 5-year contracts, all except Makasa who joined two years and Aram who joined four years after the formation. Notably, It had three first mates, a quartermaster, and a cook.

Its figurehead was carved by Anselm Yewtree on Greydon's extremely precise specifications also four years before the ship's destruction. Aram did not know what the figure was supposed to be, and if anyone else on the crew did then no one had admitted it. However as revealed by Aram's sketches, it was a figure of a naaru.

Some time after the Cataclysm on the Veiled Sea west of Feralas, Greydon's old enemy, Malus with his ship, the Inevitable, and his dark organization, the Hidden, chased and boarded Greydon's ship, after the ship's cook, Jonas Cobb, betrayed the Wavestrider's crew. Many crewmen were killed, and the Wavestrider was blown and sunk. The only known survivors were the second mate Makasa Flintwill and Aramar Thorne, the cabin boy and Greydon's son. Both escaped on the ship's dinghy.[1] Greydon was later revealed to have been captured and moved to the Hidden citadel in the Hellfire Peninsula on Outland.