A Way Gate in Warcraft III.

Waygates are devices that teleport the user between other waygates.

Way Gates are fabulous buildings that transport units from one way gate to another.[1] Muradin Bronzebeard's expedition to Northrend sought an ancient way gate that supposedly transported one to a hidden vault where the runeblade Frostmourne was held.[2]

The titan Waygate in Sholazar Basin.

Titan waygates[3] are of titan-forged origins: 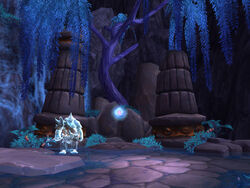 The ogre waygate in Shadowmoon Valley. 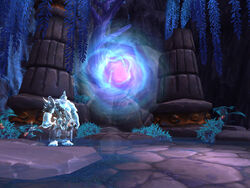 Ogre waygates are ancient relics of the Gorian Empire found all over alternate Draenor. They were built by ogre magi in ages past, but their potency has not diminished over the millennia.[9]

Opening a waygate requires the construction of a Mage Tower or Spirit Lodge in the garrison, and the collection of 25 Ogre Waystones from ogres across Draenor, including in the Bloodmaul Slag Mines and Highmaul. The use of a waygate opens a portal inside the Tower/Lodge, with a maximum of three when the structure is upgraded to level 3.

The ogre waygates are located in the following locations: