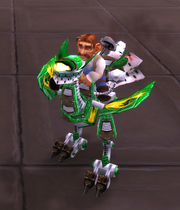 Weslex Quickwrench is a gnome quest giver located at Nesingwary Base Camp in Sholazar Basin. He personally sends adventurers to bring him the material he needs to create The Spirit of Gnomeregan.

He can later be found in Ulduar at the Expedition Base Camp informing players of how siege engines operate.

My poor flying machine. She didn't survive the crash and without spare parts, I'll never get 'er up and running again!

I never thought we'd escape from that steamy jungle! Now I'm the lead engineer of this expedition.

What can these siege engines do?

These babies may look like scrap, but they can rush ahead, knocking enemies aside. The front ram has been overloaded with a[sic] electroscopic hyper capacitator, letting it discharge electrical blasts.

Even the turret has been upgraded with anti-air rockets, providing it with a definitive edge over those blasted demolishers.

You must complete this NPCs quests to be able to see the flight master for this flight point.