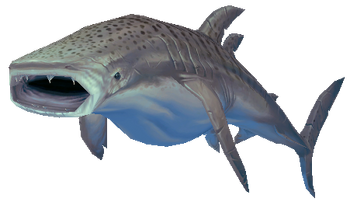 Whale sharks are horrific leviathans that typically patrol large bodies of water on both Azeroth and alternate Draenor, such as those of Vashj'ir, Suramar and Tanaan Jungle. They are wholly malicious entities whose sole purpose is the devouring of inattentive or overzealous adventurers. Few have encountered these legendary monstrosities and lived to tell the tale.

Not all whale sharks are massive; there seem to be several species, some of which are much smaller than the humongous whale sharks encountered in Vashj'ir and Thousand Needles. An example would be the Great Sea Whale Shark, which is small enough to be able to swim around the waters and canals of Suramar City.

By the time of the discovery of Pandaria, a whale shark is patrolling in the Thousand Needles. It was encountered by Aramar Thorne's and his friends.[1]

Specifically talking about the Vashj'ir creatures.

"Whale Shark is the devourer of the slow moving and inattentive. This includes plankton, whales, and AFK players.
Whale Shark swims where and how it pleases. Whale Shark /spits on your science."[2]

A blue post indicates that whale sharks eat whales, which may be the in-universe source of their name.