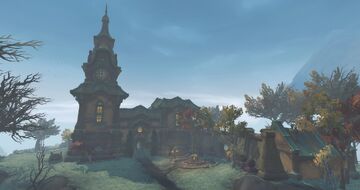 Whitegrove Chapel seen from the front.

Whitegrove Chapel is a small chapel located in northwestern Corlain in Drustvar. It is a popular place for the inhabitants of the region wishing to get married there, as the price for the reservation being very high for hosting weddings, and the time on the waiting list can be long up to more than two years.[1]

Prior to the Fourth War, it was here that Lucille Waycrest organized her wedding with her fiancé, Alexander Treadward. Unfortunately, what was a day of celebration turned into a disaster. During the ceremony, Roland the Knife and his assassins of the Red Hand attacked the chapel, creating panic among the guests.[2] On the orders of the matriarch of House Waycrest, Meredith Waycrest, who had a dislike for her daughter's fiancé,[3] their leader took the life of Alexander.[4] In the commotion, however, he too would die and be left to rot in the basement. The assassins were eventually repelled by the guards of Lord Arthur Waycrest.[5]

Alexander's body was subsequently buried in the graveyard of the chapel,[6] doomed to stay here for eternity as a ghost without any memory,[7] until an Inquisitor of the Order of Embers came to help him, allowing the ghost to remember the causes of his death and finally be able to rest in peace.[8]

During the Drust incursion, Whitegrove Chapel was still in use by the inhabitants of Drustvar. However, some wicker constructs were sent by the Heartsbane Coven to attack the chapel, assassinating the caterer and interrupting the wedding that was taking place. Consequently, Lucille Waycrest once again sent the Alliance emissary there to save the guests and repel the invaders, witnessing the fury of the bride who unleashed all her anger on one of the creatures under the helpless gaze of her fiancé, who tried in vain to convince her to run away. Lucille later mentioned that they should cease having weddings here after so much tragedy.[1]

The chapel now deserted, Scavenging Darkmaws roam the surroundings and attack anyone on sight, while spectral guardians with the guise of guards of the House Waycrest are present near the entrance to the courtyard, haunting and surveying the surroundings.

Whitegrove Chapel as seen from the back.

During the Whitegrove Chapel questline