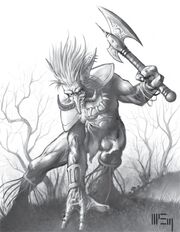 A wilderness stalker uses stealth to slip unseen and unheard through the woods and sneak in close to her prey. Born of instinct among the tauren and the trolls in ancient times, the way of the wilderness stalker has become a set of skills passed from one generation to another - and to the occasional ally, such as the orcs of the Horde. The mok'nathal have also developed the techniques of becoming wilderness stalkers - claiming the wilds of Azeroth, becoming true people of the land.

A wilderness stalker emphasizes thrown weapons as well as bonding with the world around her. Their Alliance counterparts, elven rangers, may be guardians and hunters as well, but wilderness stalkers are true creatures of the wild. They gain mastery over the terrain in which they battle, learning how to use the environment to their best advantage. No one can match a wilderness stalker for her ability to survive in harsh environments. Wilderness stalkers claim that that the lands speak to them, aiding them in their hunting and protecting them.[1]

Though a wilderness stalker excels at closing on unaware prey, she knows that their prey will occasionally sense her before she can get within reach and thus, many wilderness stalkers are also skilled at throwing weapons at a bolting target. A wilderness stalker may move through any sort of nonmagical undergrowth (such as natural thorns, briars, overgrown areas and other similar terrain) at her normal speed without taking damage or suffering any other way.

Wilderness stalkers in the world

Wilderness stalkers share a fierce competition with elven rangers. Both groups claim to train the greatest woodsmen and women on Azeroth, and attempt to prove the strength of their paths with almost bloodthirsty fervor. Perhaps the most vicious rivalry exists between high elf rangers and forest troll wilderness stalkers, who add racial animosity to the deal. The rivalry is so fierce between these individuals that both often abandon their duties and compatriots at a hint of a rival's presence. The resulting battles are perhaps worse than most engagements their respective forces see that day.

Despite their loner mentality, occasionally a wilderness stalker seeks out the companionship of others, if just for a change of pace. Wilderness stalkers prefer to associate with like-minded types, such as beastmasters and hunters. While the path of a wilderness stalker is a warrior's path, most other warriors are too loud and destructive for the average wilderness stalker's tastes (though some troll stalkers can make even the most savage orc grunt look tame). They also look favorably on druids and shaman, even those of the Alliance, simply for the respect and camaraderie of the world's spirit speakers. Even evil stalkers respect the spirits, or perhaps fear them, and rarely anger a druid or shaman. Most are affiliated with the Horde, and only a few are independent.[3]