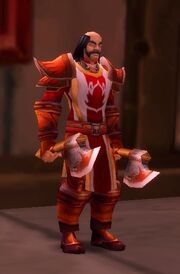 Willey Hopebreaker, previously known as a scarlet crusader Cannon Master Willey, is an undead of the Risen in Stratholme.

Balnazzar took great pleasure in leveraging the cannon master Willey's destructive capabilities in undeath, calling his prized minion by the name of Hopebreaker. The dreadlord relishes that he has twisted Willey and other Scarlet Crusaders--who so despised the undead in life--into his unwitting pawns.

Before the fight, designate someone to be the "Cannon Boy". Healers or ranged DPS are the best candidates for this. Periodically, this person should fire the cannon to kill all the reinforcements that spawn at the end of the hall, though conservation of ammo is important. Always hold on to at least one cannon ball, as Willey's death spawns a bunch of the Riflemen, which are very hard to take out by more traditional methods.