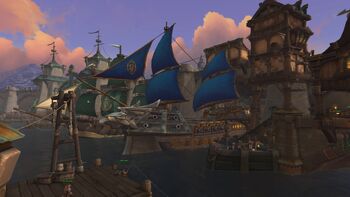 The Wind's Redemption is a battleship serving in the Alliance navy, under the control of the 7th Legion.[1] The ship is known for taking part in important missions for the Alliance, and is usually used to carry high profile leaders and champions. It has taken part in both the third invasion of the Burning Legion and the Fourth War in recent times, and is captained by the Grand Admiral of the Alliance navy, Jes-Tereth.

The Wind's Redemption played a major role in the lead-up to the Argus Campaign, during the Burning Legion's third invasion of Azeroth. As various mortal armies prepared for the invasion of the demons' homeworld, the Wind's Redemption transported important Alliance figures (including Class Order Hall champions) to Azuremyst Isle.[2] From there, they boarded the vessel known as the Vindicaar and journeyed to Argus. For this assignment, the Wind's Redemption was personally captained by Grand Admiral Jes-Tereth of the Alliance navy.

In the early stages of the Fourth War, High King Anduin Wrynn sent Jaina Proudmoore and other Alliance forces to recruit the island kingdom of Kul Tiras to their cause, and dispatched the Wind's Redemption to act as an escort. When Jaina and other members of the task force were imprisoned, the ship acted as the 7th Legion's command post from its mooring in Boralus.[3] It further serves as the base of operations for the Alliance War Campaign.

The officers on this ship engage in various activities, such as the recruitment of troops, dispatching of war champions on missions, and covert operations against the Horde in Zandalar. Here, it is once again captained by Grand Admiral Jes-Tereth, but is also host to many other Alliance heroes and champions, including High Commander Halford Wyrmbane.