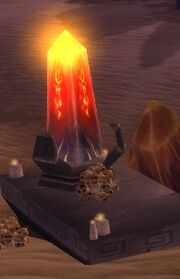 A wind stone at the Twilight Base Camp in Silithus.

Wind stones are magical artifacts located in Silithus and guarded by cultists of the Twilight's Hammer clan. They were used to summon elemental nobles from the Elemental Plane.

Since patch 4.0.3a, the items used to summon the elementals no longer drop, and the wind stones are now unusable.

In Silithus, there are four Twilight camps. In three of the camps, there are three different kinds of stones: one Greater Wind Stone, one Wind stone, and two Lesser Wind Stones. Each of the stones summoned an Abyssal elemental. The more powerful the wind stone, the more powerful the elemental was, and the better the loot. What they dropped depended on which one was summoned.

Use of any of the stones required, at minimum, the Twilight Trappings set*. This is a three-piece cloth armor set with a head, shoulder, and chest piece. They have no stats and the set bonus only allowed the player to interact with wind stones. Summoning a Duke also required a

[Twilight Cultist Medallion of Station], whereas summoning a Lord required the medallion and a

[Twilight Cultist Ring of Lordship]. * Note: These items still drop, and are not soulbound. However, the Shattering rendered the elementals unsummonable, and thus these items have no use.

Attempting to use a wind stone without the appropriate gear resulted in a rather unpleasant effect: you were struck by a damaging bolt that would almost one-shot you.

The Twilight Trappings set pieces drop from the cultists in the camps. The

[Twilight Cultist Medallion of Station] and

To summon one of the Abyssal elementals, players had to equip the appropriate equipment, then click on the wind stone. A dialog window would appear, whereupon the players would re-equip their regular armor and complete the dialog. The Abyssal elemental would appear, initially invulnerable, but five seconds later it would become attackable. It was automatically tapped by the group that summoned it. The wind stone was destroyed by the summoning, but it would respawn sometime later.

Using the Twilight Set, Medallion of Station, or the Ring of Lordship to activate any of the Wind stones consumed the three armor pieces, medallion, and ring. The elementals also despawned immediately upon leaving combat.

Instead of giving your

[Encrypted Twilight Text] to the Cenarion Circle, you may hand it in at Hermit Ortell. He will decrypt the texts for you and send them to you. In the package you receive from him, you may find a scroll to create a random object of beckoning which can then be used to choose a specific boss at the wind stones:

This means there are 12 different types of scrolls, and you cannot predict if you will get any specific type of scroll in the mail. Each of the scrolls require various reagents, ranging from 1-20

For more information on this topic, see Object of Beckoning and the page on Hermit Ortell.

The Lesser Wind Stones summon a Templar, a level 60 elite that can be taken down by a group of 1-3 players. There are 4 possible Templars, one of which is randomly summoned. However, you can pick which Templar you would like to summon if you acquire the right Crest of Beckoning and appropriate materials.

Wearing the Set and the Medallion allows you to activate the Wind stone, which will summon a random Duke. You can specify which Duke you wish to summon by acquiring the appropriate Signet of Beckoning. These are level 62 elites, and can be taken by a small group of players of the appropriate level (or soloed by higher level players). A tank, healer and 2 ranged DPS works great. The respawn time on the Wind stones seems to be approximately 15 minutes.

Activating the Greater Wind stone will randomly summon one of the raid bosses listed below. Originally they required anywhere from 20-40 people to defeat! Since then, they have been significantly downgraded, and would require a much more modest group (and can even be soloed by most players at level 70). You can specify which Lord you want to summon if you have the appropriate Scepter of Beckoning. The Greater Wind stone will respawn in 3 hours from when you summon a Lord.

The Abyssal Scepter can be used to complete the quest

[60R] Scepter of the Council. This yields 150 Cenarion Circle Reputation and a

[Dense Sharpening Stone], and they may also have a high level rare item or even a high level epic item. There is a good chance that neither an epic or a rare will drop.

When not wearing a full Twilight Trappings set

Be gone, infidel! May the power of the Abyss smite you down!

When wearing the set

A faint whisper is heard from within the stone...

Greetings, little one. Do you have news for the Templar?

I am no cultist, you monster! Come to me and face your destruction!