For the shaman artifact trait, see 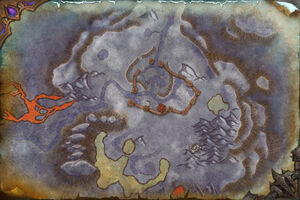 Commander, I have bad news. Olin Umberhide, the tauren who escaped with you from Tanaan, was ambushed when near the eastern perimeter of the Garrison.

He was seen being dragged off by the pale. These are dangerous, disturbing creatures that some believe were once orcs. Now they are husks of barely living flesh bent by dark magics.

Olin is resourceful, but outnumbered. I would advise traveling east to effect a rescue as soon as possible, before they eat him alive... slowly.

You will gain the follower: Olin Umberhide.

You will also receive: 11

Have you found Olin? Was he alive or dead?

Well done Commander. Olin spoke to me of your bravery and has already offered to serve under your command.

If I may advise you in this matter, I would suggest accepting his service. We could make use of a tauren with his skill sets in a land like this.

Exit the garrison to the north, then cut east and head down into Shivering Trench. At the north end of the trench is a cave full of the pale. Inside the cave, hanging upside down from a rope is Olin Umberhide. Free him:

Olin Umberhide says: You have my thanks once again, Commander. These fiends were going to eat me alive. I will meet you back at the garrison.

Head back to turn in, but before doing so, look south in the trench to find rare boar Coldtusk, and a quest-starting Icevine object, which begins