Witch doctors (or witchdoctors and witch-doctors)[1] are spellcasters and alchemists.[2]

Witch doctors often use the smoke of an herb known as

[Witchbane] to draw evil from its hiding places.[3] Troll witch doctors utilize voodoo,[4] juju and the arcane.[5] Some witch doctors carve their names into ancestral staves.

During the Troll Wars, Amani troll witch doctors set about casting hexes and curses against the infamous weapon of

[Felo'melorn], but history bears out that even the darkest voodoo did little to negate the effectiveness of the arcane blade.[6]

During times of war, the Zandalari faced off against many powerful foes. Some, even, that they could not break. Their witchdoctors devised cursed pots and through the use of powerful magic, summoned them at different locations within the enemy's encampment. Shortly after, a fountain of frogs would spring forth, causing a ruckus and confusing the enemy in the process. Little did they know that these frogs carried a plague with them that would quickly devastate their ranks and force them to retreat or surrender.[7]

Although they are savage and nefarious in the extreme, the Darkspear witch doctors have aligned themselves with the Horde out of pure necessity. These dastardly magic users are adept at manipulating the chemical processes within their fellow warriors in order to augment their combat abilities.[8] They served as spellcasters for the Horde during the Third War, being able to create several types of wards for such activities as healing, trapping, and watching over the land.

Zuvembi brew is arguably a witch doctor's most insidious concoction. Driven by the cauldron master's strength of mind, Zuvembi brew takes the will of those who breathe its fumes. It makes them compliant and easily manipulated. It is low magic, relying upon ancient cantrips and recipes known only to witch doctors of a certain skill.[2]

Troll berserkers are fueled by a cocktail of primitive and dark magic, potions concocted by the shadowy witch doctors that send the ferocious warriors into a blood-chilling frenzy.[9]

They are assisted by voodoo figurines.

Except the trolls, orcs, ogres, vrykul, gorloc, saberon, pygmy and Lost Ones can be witch doctors. There are also human witch doctors that are under the command of Colonel Kurzen in Stranglethorn Vale.

Witch doctors are semi-playable as troll priests (with shadowy magic, ritualistic chants and spiritual guidance), shamans (with wards being replaced by totems), and warlocks (with curses, soul harvesting, haunt).

A common title among troll mobs and NPCs, they range from the very powerful, Hakkari Witch Doctor, to the relatively weak, Bom'bay <Witch Doctor in Training>. 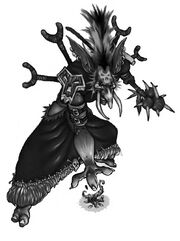 A troll witch doctor from More Magic and Mayhem.

The arts of the witch doctors originated with the trolls, and they make up the vast majority of those who practice these arts. Some of these witch doctors have agreed to take on the occasional non-troll apprentice, usually from among the orcs.[11]

The witch doctor is an alchemical and spiritual master, skilled at not only simply brewing potions and alchemical goods, but at awakening the spirits of the ingredients that go into his goods. A witch doctor at work can be unsettling, for he croons and chants to the herbs and animal parts that go into his brew, shaking a rattle to awaken them from their slumber, and sometimes even bursting into dance to appease them and make them favor him. The powers that witch doctors revere are creatures of wild, ecstatic worship who demand dynamism from their servants.[11] The witch doctor's arcane magical art is formed from the ability to twist and turn nature through a crude yet effective science called juju. Often the more cunning and savvy members of the savage troll tribes, witch doctors are uncommon among other, more civilized races that instead rely on shamanistic aid in times of need. During war, the witch doctor's juju can give a troll tribe a needed edge.

Witch doctors teach that worthy trolls receive dominion over various aspects of nature upon their death - whether plants, weather, beasts, or even disease. When witch doctors exhibit their supernatural powers to cure the sick, control nature, or assist in battle, it is said that ancestral spirits are riding them. The witch doctor's seething cauldron contains a hallucinogenic mixture of herbs, poisons, crushed insects and other noxious materials. He may add drops of this Shaka brew to improve the efficiency of any potion or alchemical item he creates. The Shaka brew maximizes all variable, numeric effects of the witch doctor's potions or alchemical creations. Drinking a potion treated with the Shaka brew leaves the imbiber with a euphoric buzz. The Bambe brew is a secret recipe that extendes the effectiveness of magical potions. Drinking Bambe brew potions leaves the imbiber with a faint crawling sensation over their skin. The witch doctor can add drops of the Zuvembi brew to any potion. The brew creates a powerful suggestive state in the imbiber that he can trigger and control. After drinking a Zuvembi brew potion, the imbiber can be dominated by the witch doctor.

Creating curses and hexes is a specialty of the witch doctor. The witch doctor can make a deadly doll of wax or tallow containing a specific person's hair, skin or blood. He can affect the target with a harmful touch attack spell as long as the person is on the same plane. The doll disintegrates after a touch attack.

Using shadow and voodoo magic, the witch doctors can also cast spells without the use of dolls. By repeating old ritualistic chants, the witch doctor curses the target into feeling pain without physically harming it, only mentally. This might still prove deadly. The witch doctor can shake and rattle the gourds and necklaces that he carries to create a frightening rhythmic effect. The juju of the highly skilled witch doctor becomes potent enough to kill (the Death Rattle). The reagent required to use this ability is a death gourd, which must be cursed and carved by the witch doctor himself using bizarre and disgusting components. The witch doctor can rattle his death gourd, targeting a number of living creatures, the closest creatures are affected first. Witch doctors are also benders of will, as they can control other lesser intellectual beings with their mind. These tricks can be fatal for several enemies of the witch doctor, not knowing whom of their allies to trust anymore. They are also able to sear through a targets mind and erase or create new memories as they please, causing the target to get confused and not knowing what is real. These rituals will also inflict massive pain onto the target.

Much like a wizard, the witch doctor relies on his ability to bend magic to his will. Juju secrets can only go so far, though.[12] 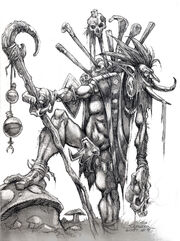 Trolls are the ultimate witch doctors. It was the trolls, so they say, who invented the art. Their pots ever bubble with strange concoctions, and they scatter protective and decorative totems around their dwellings. They speak in tongues most can't understand, communing with the strange voodoo spirits from their tribal religion that grant them their power. They decorate themselves with ritual tattoos and designs, and shrunken heads dangle from their staves. The iconic troll witch doctor focuses on helping his allies with his strange blend of science and faith. He plants magic totems to help his allies, which may start a bloodlust or an adrenaline rush in his body. A powerful witch doctor may even transform their foes into frogs. He's not a particularly skillful combatant, but when the Horde is in a scrape, somebody calls for the doctor.[13]