For the quest, see 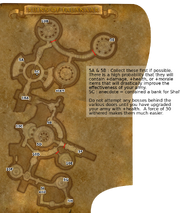 The Withered Army Training scenario starts with Thalyssra in Shal'Aran. Your mission is to lead a squad of withered into a special instance of Falanaar to defeat monsters and retrieve chests which upgrade your army. The primary reason to run the scenario is to gain reputation with the Nightfallen, although you can gain Artifact Power,

[Order Resources] and other things. The scenario is on a 3-day lockout, much like the now-removed Zul'Gurub 20-man raid.

The first time you get the quest you are given a team of 8 withered which is not enough to accomplish very much. Fortunately a few of the withered you encounter are non-hostile and can be added to your army. If you play it right you can retrieve a pair of 5-minion chests.[1] After you complete the initial run you unlock the repeatable version of the instance where you can pay

[Ancient Mana] to determine the size of your starting army. You probably want to delay starting the scenario until you have enough ancient mana to take the maximum army (limited by your ancient mana cap which is upgraded by completing certain campaign quests and by using certain single-use items in Suramar[2]).

There are three varieties of chest placed throughout the scenario which contain loot or items that upgrade your army:

The large and medium chests can be opened when you are finished with the scenario, which happens:

The medium and large chests can only be collected once per character and contain upgrades for your army that take effect the next time you go into the scenario.

There is also one larger reward chest at the end of the scenario with your reward for completing the scenario. It contains reputation tokens worth up to 425 reputation (based on your score from defeating monsters inside the scenario). You can also get Artifact Power and toys from this chest.

The following Lua script can be used with an addon like ArbitraryCommands to check which chest rewards you have yet to collect.