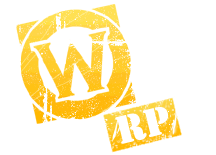 WoWRP was started on April 30th, 2006 by Elüna of Defias Brotherhood as a community driven website for everyone playing on RP and RP-PVP servers. The nature of the site would be as a sanctuary for roleplaying enthusiasts all over the world who play World of Warcraft. Members include players from both US and European servers. Users are invited to post original content such as character information, original lore, and stories, in addition to articles that may be used as references for roleplayers seeking more information related to roleplaying in the World of Warcraft universe.