This article is a copy of "Legion Class Preview Series: Monk", an official blog by Blizzard Entertainment. It's about the class changes made in the World of Warcraft: Legion expansion to the Monk.

Welcome to our World of Warcraft: Legion class preview series. In this entry, we’re exploring the Monk—to find out what’s in store for a different class, check out the overview.

We continue our early look at class and specialization design with the Monk. In these blogs, we’ll be exploring class identity, discussing Legion’s new designs, and presenting core combat abilities for each specialization—laying out the foundation upon which talents and Artifacts will build further. With that in mind, let’s delve into what it means to be a Monk in World of Warcraft.

Monks were introduced in Mists of Pandaria, and their story is woven directly into the expansion’s rich and vibrant lore. Monks bring a unique martial arts style to any fight, and harness an exotic form of magical energy that’s unfamiliar to those who practice other arcane arts. They seek spiritual balance in life and in combat, and as dangerous as Monks can be on the battlefield, they’re rarely looking to pick a fight without just cause. They view the world through a different lens, finding power through serenity and inner peace—then expressing it through artful combat techniques and powers that mend life. Perhaps most surprisingly, Monks are also adept at producing powerful brews they consume to aid them in battle.

In Legion, we’re focusing on making sure Monk abilities and gameplay better match the class’s vivid backstory. We’re also looking at abilities that already lend themselves well to the Monk’s character, but whose mechanics are in need of polish.

The brewmaster is a quirky character, though dangerous when underestimated. Brewmasters may seem to struggle with balance as they chug their concoctions in the middle of a fight, but this unpredictable behavior is far from foolhardiness. Most opponents barely have time to process the erratic nature of the brewmaster’s fighting tactics before they find themselves laid low—possibly the result of a keg smash to the head. When an opponent actually manages to land an attack, it’s often unclear how much the brewmaster feels it . . . if at all.

The gameplay for Brewmasters hasn’t quite fit their archetypes to this point. Rather than being the tricky martial artists, staggering around with an evasiveness that frustrates their opponent while being a little squishy when taking an unmitigated blow, Brewmasters have been more focused around large absorption shields and clutch self-healing. Our new design approach is to get more gameplay depth out of their strong, thematic abilities. Instead of Chi as a resource, which had little depth for Brewmasters, we’re switching to charges on Brew abilities that other abilities still interact with.

Here’s a basic look at the core defensive and offensive combat abilities for Brewmaster Monks:

Additionally, to give you an idea of how some talents may build upon this, here’s an example of one of their Brewmaster-specific talents:

Mistweavers are unique among those who heal. The energies they channel are mysterious, oftentimes misunderstood by commoners—who rarely travel beyond the borders of their homelands—as some form of folk medicine. But those who weave the mists wield the power of life’s essence, using a mixture of preventative and restorative spells to mend their allies’ wounds. The inner tranquility that guides mistweavers allows them to sustain their healing for long periods of time, and gives them the strength to care for multiple injured allies.

Our goal with Mistweaver Monks is to accentuate the existing characteristics that define them, and resolve some core gameplay issues. In simple terms, this means we’ve redesigned their abilities so that you can directly use the spells you want rather than having to set up an excessive amount of other abilities first.

The most prominent example of this was Renewing Mist, which served primarily as a setup for Uplift; we’ve reworked Renewing Mist to stand on its own, and replaced Uplift with a couple of new spells: Vivify and Essence Font. In addition, a new passive Soothing Mist mechanic gives Mistweavers a unique healing style with variable efficiency, over which you have more direct control.

We’re also focusing Mistweavers solely on healing, rather than supporting a type of mixed attack-healing gameplay that felt awkward and ultimately didn’t live up to our goals for the spec—it was unintuitive, and chiefly useful as a mana management tool. Lastly, Mistweavers will now use Mana, not Chi, as a resource, since it reduced choices and restricted gameplay in many situations.

Here’s a basic look at the core combat healing abilities for Mistweaver Monks:

Additionally, to give you an idea of how some talents may build upon this, here’s an example of one of their Mistweaver-specific talents:

Among monks, none have mastered the martial arts as the windwalkers have, and few across Azeroth can fight with their grace. Windwalkers possess unparalleled physical finesse, and are capable of overwhelming their enemies with a dizzying flurry of punches and kicks. Their skill comes primarily from a lifetime of intense training and discipline, but the power they exhibit is shrouded in more mysticism than meets the untrained eye. The combination of their peak physical conditioning, state of inner calm, and leveraging of mystical chi makes windwalker monks a true force to be reckoned with.

Similar to Brewmasters, here we focused on getting more depth out of less complexity. Windwalkers’ new Mastery, Combo Strikes, encourages mixing a variety of abilities, which provides a constant gameplay hook that influences every ability they use and draws inspiration from classic fighting games. In addition, we’ve polished Storm, Earth, and Fire to remove some cumbersome mechanics. Windwalkers still use a combination of Energy and Chi, along with a heavy dose of short cooldowns.

Here’s a basic look at the core combat abilities for Windwalker Monks:

Additionally, to give you an idea of how some talents may build upon this, here’s an example of one of their Windwalker-specific talents: 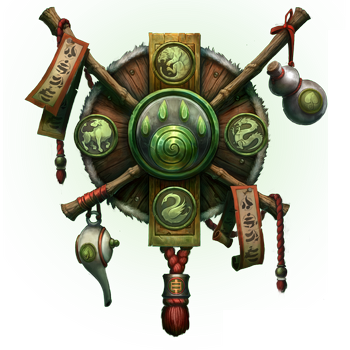 We hope you’ve enjoyed this early preview of our approach to Monk class and specialization design in World of Warcraft: Legion. We’ll continue our series later today with a look at Druids.