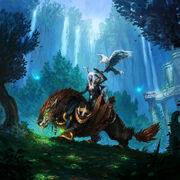 Wolfhawks are large, carnivorous flying mammals which, as the name implies, resembles a wolf-hawk hybrid. They come in three known colors: brown-green, grey-red, and cinnamon-blue. The spirit of a great wolfhawk named Haukenulfnir, who stalked the wilds when the world was new, dwells in the Fields of the Eternal Hunt in the Halls of Valor.[1]

Wolfhawks are tamable by hunters as part of the Feathermane family. In order to tame Feathermanes, hunters must purchase the