Wowpedia
Register
Don't have an account?
Sign In
Advertisement
in: Articles to clean up, Statements needing citations, Speculation,
and 2 more

For the mob in Silverpine Forest, see Worg (mob). 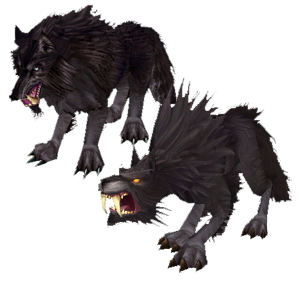 Orcs use worgs as their mount, such as the Bleeding Hollow clan in Hellfire Peninsula.[1] The Scarshield Legion utilizes worgs as powerful attack dogs, and also possess a pair of enormous worgs, Gizrul and Halycon.

Some say the worg controlled by the Blackrock orcs in Burning Steppes are the creation of a supernatural force. Others say they are not true worg but instead a breed of demon dog, granted to the orcs by a fallen pit lord. In reality, the worg of Blackrock come from the den mother Halycon and her mate.[2] The worgs are bred, trained, and ultimately exported from Blackrock Spire.[3]

A new type of worg has been seen in Northrend, a more fierce-looking predator. They are also known as saber worgs.[citation needed]  These can mostly be found in Howling Fjord, Grizzly Hills, Borean Tundra, and the Storm Peaks.

They grow 10 feet long and weigh over 1000 pounds. Like normal wolves, their pelts range in color from pitch black to gray, brown, and even snowy white. Worgs live for the hunt, both for the sheer joy of it and because their larger bodies require large amounts of meat. Some humanoid races value worgs as steeds due to their increased intellect, but a worg's foul disposition turns away many trainers. Instinctive pack hunters, worgs prefer to attack in tandem. They enjoy surrounding an opponent, tripping him up, and then attacking relentlessly as he tries to rise. A badly wounded worg usually flees.[5]

Worgen seem to be named after worgs, as such the wolf demigod Goldrinn could be a worg.