This article is about the playable race. For the worgen lore, see Worgen. For the in-game faction, see Gilneas (faction).

The worgen of Gilneas are one of the playable Alliance races in World of Warcraft, introduced in Cataclysm. It was only recently that worgen were considered anything more than mindless, savage beasts, and even then, many still are to this day. In the hearts of any who have faced their wrath, Gilnean or otherwise, their very name inspires fear. Krennan Aranas managed to concoct a partial treatment for the worgen curse. Upon experimenting on captured Gilnean feral worgen, it allowed them to regain their sanity (giving them control of their minds), thus allowing them to retain the semblance of their past human selves. The night elves later offered a more effective treatment: drinking from the wells of Tal'doren would allow them to transform back into their human selves at will. There is, however, no full cure, and even the noblest of worgen hunt in the wilds, run on all fours as if it satisfies some primal urge deep within, and struggle with their own bristling rage.

Until level 6 worgen characters are humans located in Gilneas City where they get affected by the worgen curse. They then quest through the kingdom of Gilneas until around level 10, where they leave to join the wider world. The Gilneans still fight to truly reclaim their home, and as a result, have no capital city to call their own for the time being. Genn Greymane rules as the king of a refugee nation from Stormwind City, and prior to the War of the Thorns, many worgen called the Howling Oak in Darnassus their home. As former humans, all worgen speak Common as their main language. 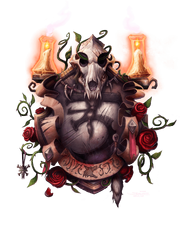 The worgen were first unleashed upon the Eastern Kingdoms by Archmage Arugal during the Third War. Primarily used as a weapon against the Scourge, the beasts soon proved to be a burden greater than the humans of Lordaeron could bear. A mysterious curse began to spread among those who fought alongside the wolf-men, causing them to become worgen themselves.
The curse rapidly spread as it reached Gilneas, trapping its inhabitants behind the very walls built to protect them. The survivors of the curse now seek to find a new fate for their people -- their destiny unwritten...

Led by their indomitable king, Genn Greymane, the proud citizens of Gilneas once stood with the Alliance against the vile orcish Horde that sought to conquer all of Lordaeron. Gilneas survived but, in the years following the Second War, the kingdom drew ever inward. Distrustful of their former allies, the Gilneans erected a mighty wall at the borders of their land, closing off their nation - and their hearts - from an ever-darkening world. Now, many years later, as the seemingly unstoppable undead Scourge marches across Lordaeron, human civilization once again teeters on the edge of destruction. As war and terror close in all around them, the citizens of Gilneas are faced with one, terrible truth: their mighty wall cannot hold back the dead for much longer and, worse, rumors of a new threat have risen within the kingdom's borders of feral, nightmare creatures that walk upright as men but hunt and howl as wolves.

The worgen curse originated from a druidic sect who followed Goldrinn, known as Druids of the Scythe. They shapeshifted into the feral worgen and eventually lost their minds to its violent nature. The other druids agreed that they must be locked away, and thus put them into eternal slumber deep beneath a tree... until the day Arugal and Velinde Starsong tampered with the Scythe of Elune, releasing them.

The curse could not be contained, persisting in the lands of Silverpine and extending into the walled nation of Gilneas, where the curse rapidly reached epidemic levels. The citizens of Gilneas found themselves trapped, with no hope of escape. They retreated deeper within the isolated domain, and there they survived, fearful of the savage presence that lurked just outside the barricades.

Tensions among the displaced citizens escalated over time, resulting in a civil war that now threatened to destabilize the embattled nation even more. There were those among the Gilneans, however, who clung to hope. Many believed that a cure for the worgen curse may exist, although others had nearly given up, fearful that if the barricades should fall, their humanity would be lost forever.[1]

Induction to the Alliance

After the Cataclysm, the Greymane Wall was destroyed. Setting their sights on the vulnerable country of Gilneas, the Forsaken have started an invasion of the kingdom. In their hour of greatest need, the worgen of Gilneas called out for their old allies' aid. As it was the night elves who created the curse in the first place, they felt obliged to help their newfound allies.[2] The Gilneans are now back in the Alliance, and with their new allies by their side they aren't giving up their home without a fight.

When starting a worgen character, the first 5-6 levels are played as a human, shortly after the Northgate rebellion. You start off within Gilneas City as it is being evacuated, only for the worgen to attack before the evacuation can be finished. Following the initial few levels, in which players go about performing various important tasks such as reuniting the Gilnean people, your character is bitten and transformed into a worgen. After finishing the questline in Gilneas City, the player is moved to Duskhaven, prior to the Forsaken invasion of Gilneas.

Worgen characters can appear in

When creating a worgen character, a human stands in the background displaying the worgen's human form.

As stated above the worgen curse was created by night elf druids, and the night elves feel somewhat responsible and are helping the worgen fight for their city. During this time the night elves have taught the worgen the terms of magic that led to their creation, druidism.

The presence of harvest-witches like Celestine suggests that Gilneans already had a good start with druidism. She makes reference of druid practices being "the old ways" and recounts a time when their powers supplied food during a time of famine, pointing to druidic roots as a base, even before night elf contact. This is agreed with in "Lord of the Pack" short story when Genn Greymane stated "He had heard that druidism was practiced among some of Gilneas's agrarian folk, but he hadn't been exposed to it until recently". It seems many worgen have at least tried to embrace the druidic herritage of their new race after their transformation. This can be seen as a coping mechanism, or the fact that the natural powers can help them keep control of their animalistic rage.

There is sufficient proof and reason to believe that the practices of primitive druidism or "the old ways" were once alive and well within or around Gilnean society before the sealing of the Wall. It is likely that that the people of Gilneas would have once practiced or acknowledged (in varying degrees) the traditions and reverences of nature worship. In time though (before the Greymane Wall was erected) the followers of the Holy Light must have spread their teachings to Gilneas and succeeded in converting many of its people, causing druidism to slowly fade into the past and become mostly forgotten.

That said, the Night Elves have taken great interest in the worgen and are readily teaching them more about druidism, helping them to understand other areas of the path. It seems that this is the kaldorei's attempt at redemption in the eyes of their allies as they are partially responsible for the worgen curse reaching them... They feel they owe it to the worgen to explain and teach the magic that can lead to their salvation, druidism.

]] The worgen have retained the skills they had as human citizens and choose to continue using them after their transformation.

A worgen death knight versus a forsaken spellcaster.

Worgen death knights are former slaves of Arugal. These former Gilnean citizens of Pyrewood Village managed to escape the wizard's control only to fall prey to the Lich King. During the Death Knight starting quests, you learn how worgen death knights came to be.

While the worgen curse makes raising them into undeath far more difficult than it is for normal humans, the powers of the Lich King himself are sufficient enough to raise worgen as death knights. Even though those worgen did not imbibe the waters of Tal'doren to control the curse, the Lich King's power shattered their animal instincts, leaving the logical, human mind under his control. After the Lich King lost control over the Knights of the Ebon Blade, their intact human minds became free again, without the animal side, while still retaining their worgen forms.[3]

[Running Wild], in which they take to all fours and travel at mount speed. Running Wild is automatically learned at level 20, allowing worgen players to travel 60% faster, but they'll have to purchase Journeyman riding skill at Level 40 to upgrade the ability to go 100% faster.

Running Wild is a different mechanic than the removed tauren