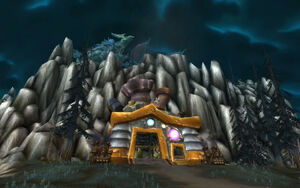 Workshop in the Isle of Conquest.

Workshops are the hideaways where smiths, engineers and inventors gather to work together and create technological devices and war machines. As tinkerer races, the gnomes, dwarves and goblins are all known to use workshops even though the latter also have their own goblin laboratories.

The inventors were highly adept at creating outlandishly clever contraptions for military use. Among the many bizarre inventions created by the gnomes were the flying machines that hovered high above both land and sea, as well as the implausible submarine that could move under the seas. The gnomes were also responsible for perfecting the technique of extracting various chemical compounds out of oil to make gunpowder and explosives. Although the gnomes were a bit odd and eccentric, none could deny their value to the Alliance.[1]

The workshop is a hideaway where dwarven smiths labor amid smoke and steel to create their unique innovations. Flying gyrocopters are assembled at this location, as well as heavily armored steam tanks. Artillery is thoroughly researched in workshops, providing ammunition for the mobile dwarven mortar teams.[2]

As a result of the catastrophe in Gnomeregan, Alliance workshops of the Third War were operated by dwarves without the participation of gnomish engineers and laborers. However, gnomish blueprints and designs were still used.[citation needed]

Exceptional tinkers have made this community their home. Signs of a workshop include; sturdy clockwork devices assisting the locals in their labors, stockpiles of mechanical parts, and phlogiston collectors.[3]

Workshops are relatively rare as buildings. Any engineer's home could be considered as a workshop, and any place where vehicles and siege weapons are prepared could be as well. Some areas are specifically identified as workshops:

The Strand of the Ancients battleground also have several unnamed workshops. As places where siege engines and shredders are prepared, Sprocket's Garage in Stormshield and Gallywix's Garage in Warspear could be considered workshops as well.