For the area in Antorus, see World Soul (subzone). 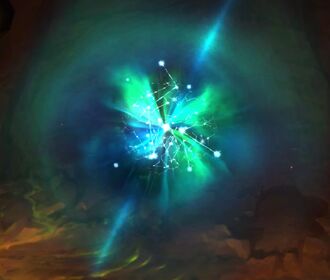 The world-soul of Argus in Antorus, the Burning Throne.

World-soul is the name given to the spirit of a titan. The first and most vulnerable stage of a titan's life, world-souls are powerful, nascent titan souls who originate as masses of energy spun out into the cosmos at the moment of its creation, eventually finding comfort in the warmth of a sun. In time, a planet coalesces around the newly-formed world-soul, protecting it as it grows.[1] These nascent titan souls exist within the fiery cores of a small number of worlds scattered throughout the Great Dark Beyond; there they slumber for ages, suffusing the planets they inhabit with their energies as generations of life live and die upon them before eventually awakening as living worlds.[2]

Speaking to a world-soul is not like speaking to a mortal, which is why Azeroth needs Magni Bronzebeard as her Speaker.[3] Magni says that Azeroth does not speak to him in words but in feelings, like the feeling of a crumbling mountain range, a deep dark sea, or a sunrise.[4]

The first known world-soul to awaken was Aman'Thul. When he awoke, he set out to find others of his kind, rousing them from their slumber until they matured into full-fledged titans and joined him in his search. Aman'Thul and his siblings would become known as the Pantheon, and together they would order countless worlds in the hopes of finding more of their kind. Despite their efforts, the titans discovered fewer and fewer world-souls during their travels. They were not disheartened, however, for they knew that they had only explored but a small corner of the immeasurably vast Great Dark Beyond.[2]

The void lords, jealous of the titans' power, had always wanted to corrupt one of them and make it their own. However, the titans were too powerful and completely oblivious to their efforts of corruption, which proved futile. The void lords instead decided to go after titans when they were still in their most fragile, vulnerable state when they were still slumbering world-souls. They pooled their energy to create the Old Gods, charged to find and corrupt nascent titans throughout the Great Dark. Not knowing which planets contained world-souls, the void lords hurled their creations out into the cosmos in the hopes that some would smash into a planet that contained one.[5]

On each world they encountered, the Pantheon employed techniques to ascertain whether a world-soul was present.

Inert or not, the Pantheon had vowed to maintain and protect all worlds they visited. To do so, they empowered primitive life-forms to uphold the integrity of their ordered worlds. The Pantheon also embedded colossal machines in the surface of these worlds. Through these devices, the titans could monitor them, and purge them of life should their evolutionary paths succumb to disorder.

To aid the Pantheon, Aman'Thul called upon a mysterious race known as the constellar. These celestial beings observed the many worlds ordered by the titans, staying vigilant for any sign of instability. When it was necessary, the constellar could initiate a fail-safe procedure to scour life from a world in the hopes of resetting its evolutionary process.[2]

Sargeras and the unnamed world-soul 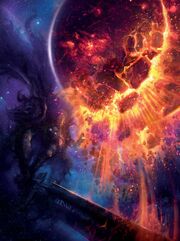 Traveling in a cold corner of the Great Dark Beyond, the titan Sargeras stumbled upon a world-soul. To his horror, he saw that the planet had been almost completely infested by the Old Gods, and the nascent titan's tranquil dreams had turned into horrific nightmares. After learning of the void lords' plans from the black world's nathrezim inhabitants — that if the Old Gods succeeded in corrupting a world-soul, it would awaken as an unspeakably dark creature who would devour all of creation — Sargeras cleaved the corrupted world in two, instantly killing the nascent titan within.

When he returned to the Pantheon to tell of his discovery, Sargeras was chastised by his brethren, who insisted that they may have been able to save the world-soul without killing it. It was this event that later led Sargeras to form the Burning Legion in an attempt to prevent the void lords from ever spawning a dark titan.[6]

After Sargeras' departure, his colleague, Aggramar, continued his work. One day, as he was wandering in the Great Dark, Aggramar heard the tranquil dreams of the most powerful world-soul yet discovered: Azeroth. To his horror, he discovered that the planet had already been claimed by the Old Gods, though the defenseless titan within remained as yet untouched. After Aggramar and Eonar convinced their brethren to save Azeroth from corruption, the Pantheon crafted the titan-forged to do battle against the Old Gods, before eventually imprisoning them deep beneath the surface of the planet.

Star Augur Etraeus showed the class order armies, who led the assault on the Nighthold, the monstrosities of the universe. He used his stellar observatory to project desolate regions of the Great Dark Beyond, where at least three planets entirely consumed by the Old Gods could be seen (see the picture above). These are not necessarily planets with world-souls, as the Old Gods were sent to as many worlds as possible in order to find one containing a soul.