This article is about the World Trees. For the portals to the Emerald Dream, see Great Tree. 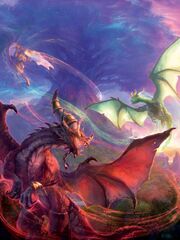 World Trees are ancient, massive trees connected to the Emerald Dream, and which serve as home to the night elves.[1] After the Great Sundering, Nordrassil was created by the Dragon Aspects to seal the second Well of Eternity. Through it, they blessed the night elves with many gifts such as immortality. The elves would later use a branch from Nordrassil to grow Andrassil, but they were forced to fell it when the Old God Yogg-Saron tried to corrupt it, renaming it Vordrassil.

With Nordrassil burned during the Third War, the druids of the Cenarion Circle led by Fandral Staghelm grew a new world tree named Teldrassil with the aid of the Circle of Ancients, though it would not receive the blessing of the Aspects. The shaman of the Earthen Ring and the druids eventually managed to heal Nordrassil as well.

Shaladrassil in Val'sharah now on the Broken Isles is known to have existed since before the Sundering,[2] and an unnamed world tree exists in the Nightmare as well, though their origins are unknown.

Nordrassil, which means "Crown of the Heavens", was the original World Tree planted on the summit of Mount Hyjal after the War of the Ancients, grown from a seed of the Mother Tree G'Hanir. Nordrassil's roots grow deep into the earth, spreading life-giving energy across the world.[3] It was blessed by the Dragon Aspects to grant immortality to the night elves and to allow their druids to enter the Emerald Dream. The power was unleashed after the Battle of Mount Hyjal and Nordrassil was devastated by this event. By Cataclysm, Nordrassil has regrown, but Nozdormu's lost blessing never returned.

Located on an island of the same name, off the coast of northern Kalimdor, the giant tree Teldrassil — which means "Crown of the Earth" — was an unsuccessful attempt by Archdruid Fandral Staghelm and his compatriots to restore the night elves' immortality, lost with the near destruction of Nordrassil. Teldrassil was eventually blessed by Alexstrasza and Ysera years later, but not by Nozdormu. It was the youngest of the World Trees until it was burned down.

Andrassil as seen within the Emerald Nightmare

Andrassil, the "Crown of the Snow",[4] was a World Tree located in the Grizzly Hills of southern Northrend. It was grown from a branch taken from Nordrassil by Fandral Staghelm and his druids in order to stop the spread of saronite in Northrend. Without the blessings of the Aspects however, it was vulnerable to the Old Gods' corruption. The ancient druids were forced to fell the tree, which they renamed Vordrassil, the "Broken Crown".[4] It has since become the site of the furbolg city of Grizzlemaw.[5] The tree's roots had pierced the prison of the Old God Yogg-Saron, leading to the corruption of the furbolg.[6] Andrassil allowed the Old Gods access into the Emerald Dream, from which they created the Emerald Nightmare.[4]

Within the Emerald Dream, Andrassil still stands tall, even as the Emerald Nightmare corrupts the rest of the area.[7]

Shaladrassil is a World Tree situated in Val'sharah on the Broken Isles. It has been corrupted by the Emerald Nightmare and also serves as a gateway into the Emerald Dream. After the War of the Ancients, many surviving satyrs were rounded up. Thaon Moonclaw argued to execute them all but was overruled, and they were placed in an eternal sleep deep beneath the roots of the tree. With the return of Xavius, the satyrs have broken free.[8]

There is a world tree in the Emerald Dream's counterpart of Un'Goro Crater that has been taken by the Emerald Nightmare and is now home to Il'gynoth.[9]

In an effort to stop the spread of saronite throughout the world, Fandral Staghelm and his closest followers took six enchanted branches from Nordrassil and planted them in Ashenvale, Crystalsong Forest, Feralas, Duskwood, and the Hinterlands. These Great Trees successfully scoured the saronite deposits from their respective regions and, heartened by their success, the druids planted the last and greatest bough in Northrend, where it grew with astonishing speed into the World Tree known as Andrassil.[4]