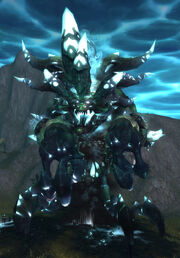 The Sha of Anger in Kun-Lai Summit.

A world boss is a raid boss-level monster that appears in the main, shared game world rather than an instance limited to a certain number of players. They are also known as world raid bosses, outdoor bosses, or outdoor raid bosses, and the phrase raid encounter may be used in place of "raid boss". These bosses were designed to be fought by one or more raid-sized groups of max-level characters, although lower level characters may be brought along.

World bosses were phased out of Blizzard's design philosophy starting with Wrath of the Lich King. Cataclysm did introduce some small group mini-bosses, but nothing that required a serious raid. With the release of World of Warcraft: Mists of Pandaria, world bosses returned in the form of new encounters on Pandaria. This page contains a short overview of all world bosses, both current and removed.

Originally, Azuregos and Lord Kazzak were added early in WoW. They were two of WoW's greatest promotions of intraguild cooperation and interguild rivalry, as killing them required tracking their spawn, forming a raid, and beating the encounter and the opposing faction (and at times same faction griefers). Their loot was also among the best at the time of their popularity.

Shortly before the Ahn'Qiraj event, the four Dragons of Nightmare were created, and added an entire new round of World Raid bosses. They were initially killed for having the best items for their slots, and later farmed for their nature resistant gear when it became apparent that some Temple of Ahn'Qiraj encounters required it. They were also involved in the Scepter of the Shifting Sands green piece questline.

With patch 2.0, Highlord Kruul began to terrorize Azeroth, in place of Lord Kazzak (and his Azeroth loot table). After the Burning Crusade came out, two new world raid bosses were introduced, Doom Lord Kazzak and Doomwalker (there were others initially shown in databases as ?? bosses, including a rare spawn from a quest in Blade's Edge in which you can spawn a raid boss who flies away, but is unaggro-able. But currently it is accepted that there are 2 BC world raid bosses). The popularity of the two was short-lived. After a couple months it became apparent that loot off of Karazhan was on par or better, while not having the additional faction vs. faction griefing factor.

With patch 2.2, world bosses were often left untouched for long periods of time. There were occasional guilds that use them as either practice for raiding, or undergeared guilds trying to gear up. But with the announcement by Community Manager Bornakk that they did not plan to add additional world raid bosses[1][2], the days of a world raid boss came to an end.

Blizzard did not add any world raid bosses for Wrath of the Lich King. Cataclysm does contain some small group mini-bosses though. True world bosses were reintroduced with Mists of Pandaria and each of them using the new personal loot system.

With Legion, there was only one world boss available per week with a world quest. This was carried over for the Invasion Point world bosses in Argus of patch 7.3 and for Battle for Azeroth and Shadowlands.

[WoW's 13th Anniversary], the Classic world bosses return each year for the duration of the event, along with their original loot.

One Broken Isles boss spawns per week with an associated world quest, defeating most of them is required for

[Unleashed Monstrosities]. The more powerful Broken Shore bosses each spawn with mutually-exclusive world quests that have a chance of happening each day. They are required for

[Terrors of the Shore].