World of Warcraft: The Magazine 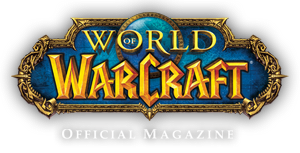 World of Warcraft: The Magazine was a collaboration between Blizzard Entertainment and magazine publisher Future,[1] first showcased at BlizzCon 2009.[2] It was discontinued in September 2011, after only five issues.[3]

The World of Warcraft Official Magazine is ending its run, and the current issue, #5, will be the last one.

This has been a difficult decision to come to. Although both Blizzard Entertainment and Future US are very proud of the magazines that we have created together, we have each decided to focus our efforts on other areas.

We really appreciate your support for the magazine and would like to offer you a premium based on your remaining subscription term, or, if you prefer, a full refund of your remaining balance instead. To redeem your premium or request a refund, please visit www.worldofwarcraftthemagazine.com by September 30, 2011.

(Please be aware this code is non-transferable and can only be used once.)

Again, we would like to thank you for your continued support and hope you enjoy reading issue 5 as much as we enjoyed making it.

Future US and Blizzard Entertainment