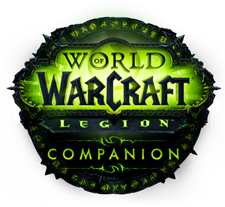 The World of Warcraft: Legion Companion App was announced at PAX West on September 3, 2016[1] and released on September 6, 2016. It is a free mobile phone application for iOS and Android that allows the player to manage their Class Hall Missions while away from their computer.

This app was superseded on August 13, 2018 as the World of Warcraft: Companion App.