Not to be confused with wyrm. 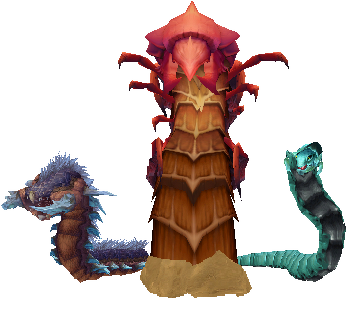 Worms are a type of invertebrate found on Azeroth, Outland, Draenor, and the Elemental Plane. They have long, tubular bodies, ranging in length from a few inches to several feet or more. Many species are segmented and have few or no limbs. Worms generally live underground, in deserts, or in places with plenty of carrion.

In World of Warcraft, worms tend to be classified as beasts or critters. Some species are skinnable, while others are not. Worm items are often useful as fishing bait, and some worms can be kept as companions.

Only rock borers, jormungar, rockworms and silkworms can be tamed by Beast Mastery Hunters. Worms have the exotic ability

[Burrow Attack] which both does AoE and looks visually neat as the worm burrows underground.

[Strength of the Earth].