For lore about archers, see Archer. For all the wounded, injured or dying NPCs in World of Warcraft, see Category:Wounded.

On occasion you may find someone who is wounded. In such cases, the disciples from Northshire Abbey are bestowed with the ability to heal the wounds and maladies of others, and may be of assistance. If your soldiers become wounded during battle, their condition will worsen, and they should also seek the assistance of your clerics.[1] 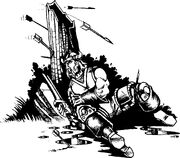 A Wounded as seen in the Warcraft: Orcs & Humans Manual.

Wounded are only found in the The Dead Mines mission of the Human campaign, and will resume their roles as Archers once one of your units moves into contact with them, or a Cleric casts the Healing spell on them.

Despite having their own unit portrait in the game files and manual, the Wounded encountered in the mission use the Archer portrait.