Wrath of the Lich King Soundtrack 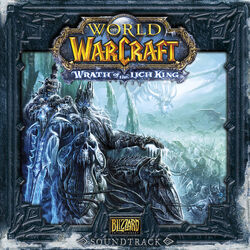 Cover art from the Collector's Edition.

The World of Warcraft: Wrath of the Lich King Soundtrack was composed and arranged by Russell Brower, Derek Duke, Jason Hayes, Neal Acree and Glenn Stafford. It was released with the Collector's Edition of the expansion.

At the same time, the soundtrack was released via iTunes, but with three of the tracks changed to other selections. Players wanting to collect all of the music tracks will need to purchase both editions.

The former Prince Arthas has launched a new campaign of undeath from his citadel in Northrend. As the plague once more sweeps across the land, the Alliance and Horde struggle to set aside their age-old hatreds and unite against the greater threat. Meanwhile, the blue Dragon Aspect, Malygos, plans to end the abuse of arcane magic, whatever the cost. This is the music of ice and despair, a dirge and a call to arms... the last stand against the Lich King.