Wrathion, the Black Emperor is the first boss of Ny'alotha, the Waking City.

The boss fight is not truly against Wrathion himself, but rather a faceless one named Ki'merax disguised as a corrupted version of the Black Prince. Ki'merax's true form is revealed upon "Wrathion's" defeat.

Despite all his precautions, Wrathion could not avoid succumbing to the madness that claimed his father. With his mind twisted by N'Zoth, he believes that the only way he can truly defend Azeroth is to rule it in the Old God’s name. A prince no longer, Wrathion now takes his rightful place as the Black Emperor.

Stage One: The Black Emperor

Additionally, scorching blisters form throughout the area. Scorching Blister: From the ash, scorching blisters form. Inflicts 25 Fire damage every 1 sec to enemies standing within them. These blisters grow over 10 sec before exploding, inflicting 120 Fire damage to enemies within 20 yards. Molten Eruption: Slams the ground, causing lava to erupt, inflicting 34 Fire damage and knocking back players within 3 yards of point of impact. Each eruption leaves behind a Molten Pool. Molten Pool: Inflicts 25 Fire damage every 1 sec to a player standing within the pool. Any pools remaining when Wrathion returns are changed into a Gale Blast. Tail Swipe: Inflicts 80 Physical damage to players in a cone behind him, knocking them back. Creeping Madness: While under the effects of this madness, players gain stacks of Slow while they are moving for 1.3 min. At 50 stacks of Slow, the player receives 61 Shadow damage every time they move. Stage Two: Smoke and Mirrors Scales of Wrathion: Scales fall from Wrathion. Catching a scale inflicts the player with Burning Madness. Any scales not caught inflict 70 Fire damage to all players.

Crackling Shard: Summoned from molten pools. Any shards still remaining at the end of Stage Two are turned into Lava Pillars. Hardened Core: The shard's hardened core makes them immune to damage. (Mythic) Pyroclastic Flow: When a shard is destroyed, it inflicts 15 Fire damage to all players within 10 yards. Lava Pools: Formed from unbroken shards, lava pools inflict 25 Fire damage every 1 sec to players standing within the pool. With every lava pools created, an additional stack of Rising Heat is applied to players. Rising Heat: As lava pillars consume the space, heat rises inflicting 0 Fire damage every 1 sec for the duration of the encounter. This effect stacks. Ashwalker Assassin: Conjured from smoke and ash, these servants of Wrathion stalk the players during Stage Two. Smoke Shroud: Shrouded in smoke, the assassin fades from view. Revealing the assassin from stealth or inflicting damage disperses the shroud from the minion. Sap: While shrouded, Wrathion's minions incapacitate their victims. Dark Ambush: While shrouded, Wrathion's minions will strike from the shadows inflicting 120 Shadow damage to their current target.

As the fight progresses, Wrathion teleports to random locations and uses [Burning Cataclysm] against the raid, igniting [Molten Eruptions] throughout the space. Doing so consumes Wrathion's energy, and when all his energy is depleted, he melds into the shadows and inflicts [Burning Madness] on enemies. Additionally, all [Molten Eruptions] transform into Crackling Shards. While hidden in the shadows, Wrathion regains energy, and once fully recharged returns to the fight space and turns any remaining Crackling shards into [Lava Pillars]. 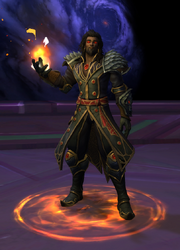 Wrathion before the start of the encounter.

Intro
The encounter starts off with Wrathion standing on the north side of the platform in his human form.
N'Zoth, the Corruptor whispers: Come, my chosen. Witness the fate of this world.
N'Zoth, the Corruptor whispers: Behold the one who shall herald its coming.
Wrathion says: My dear friends. A wondrous honor has been bestowed upon you. The chance to embrace your destiny, as I have.
Wrathion says: N'Zoth has shown me the inevitable truth. That to save Azeroth, we must accept his gift.
Wrathion says: Kneel and serve. It is the only way.
Wrathion assumes his dragon form.

Smoke and Mirrors
You think yourselves immune to madness?
Are you certain that it has yet to take hold of you?
Rest easy, heroes. My servants will ensure your deaths are painless.

End of Smoke and Mirrors
Why resist? Give yourselves to the flames!

Wipe
Your efforts were admirable, but ultimately pointless. 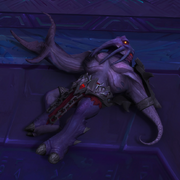 Wrathion yells: Azeroth... is doomed...
The Vision of Destiny disappears, and the players and the Black Emperor are transported to the Annex of Prophecy. The real Wrathion walks in.
N'Zoth the Corruptor whispers: You tread within a vision of what was... and what will be.
N'Zoth the Corruptor whispers: My empire is this world's inevitable destiny.
MOTHER says: Signal interference negated. Connection restored.
Magni Bronzebeard says: Yer back! What happened?
The corpse of the Black Emperor dissolves, revealing it to actually be the n'raqi Ki'merax.
Wrathion says: I learned that it doesn't take much for my friends to believe I betrayed them.
Wrathion says: Champions, that vision was as much for me as it was for you. N'Zoth wants us to believe that my corruption is inevitable.
Wrathion says: Doubt me if you must, but know that I will not rest until his smoldering corpse lies at my feet.

Despite all his schemes, Wrathion could not avoid succumbing to the madness that claimed his father. With his mind corrupted by N'Zoth, the Black Prince is a force of unbridled hatred, capable of annihilating all who oppose him in blood and flame.