Wyrmbog. The entrance to Onyxia's Lair can be seen in the distance.

The Wyrmbog is the area in the south of Dustwallow Marsh, south of the Dragonmurk. Many dragons of the black dragonflight, including Onyxia and Emberstrife, reside here. The entrances to Emberstrife's Den and Onyxia's Lair are located within this bog.

The southern reaches of Dustwallow Marsh are called “Wyrmbog” for all of the black drakes and dragon whelps that lurk among the shadowed rocks and slither across the waters to attack anything foolish enough to come near. Alliance and Horde often come into conflict with the dragonkind as they skirt the edges of Wyrmbog on the way to other parts of Kalimdor.[1] 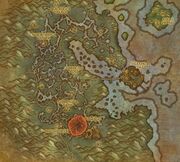