Wyrmrest Temple (or simply Wyrmrest)[1] is an ancient Titan structure located in the Dragonblight on southern Northrend. It is the base of operations for the Wyrmrest Accord and was the ancient meeting place for the five dragonflights.

The Chamber of the Aspects takes the lower portion of the temple while the Wyrmrest Summit takes the uppermost section.

Thousands of years ago, the titanic keepers bestowed upon the five proto-dragons that defeated Galakrond the power of the Pantheon, thus the Dragon Aspects were born. To help the Aspects, the keepers created a new species that would serve as their allies and consorts, the dragons. With this, the dragonflights were created. The Dragon Aspects and their flights would all be bound by their duty to protect Azeroth. To strengthen this bond, the keepers forged a grand tower in northern Kalimdor named Wyrmrest Temple. It would serve as the heart of the dragons' culture, a sanctuary where they could gather and discuss their activities. But above all, Wyremst Temple would stand as a symbol of their unity.[2]

Many legends hold that the five great Dragon Aspects were blessed within this fortress and given their charge to watch over the budding world. In reality, they were blessed at the site where Galakrond died.[3] Perhaps it is for this reason that dragons nearing the end of their lives come to the Dragonblight to enrich the land with their passing. Surrounding Wyrmrest Temple are five majestic dragon shrines: red, bronze, green, blue, and black, each blessed with the powers of its respective flight. In recent times the undead Scourge has laid siege to these shrines in an effort to further its attempts at raising terrifying new variations of undead dragons to serve the Lich King. In an attempt to arrest these invasions, the red Dragon Aspect, Alexstrasza, has begun recruiting heroes to aid in the fight against the Scourge.[4]

Wyrmrest Temple includes two single encounter raid instances where players fight a single boss inside the Chamber of the Aspects. Right now there are 2 raid instances and it is possible that they could add more bosses to the instance.[5] The Keep itself is a neutral town controlled by the red dragonflight. From here players fly up to the peak where they meet Alexstrasza and her consort, Krasus.[6] The floating orb the top floor (where the dragons meet) is known as the Orb of Unity. It does not do anything but is the symbol of the unity of the Wyrmrest Accord.

Wyrmrest is situated in the center of The Dragon Wastes, which itself is the center of Dragonblight. South of Angrathar the Wrathgate and surrounded by the dragonshrines, from the northeast, clockwise: Bronze, Emerald, Azure, Ruby, and Obsidian. The Path of the Titans passes through the shrine from north to south, and located just to the east is The Mirror of Dawn.

A possible future Wyrmrest Temple, as seen in End Time. 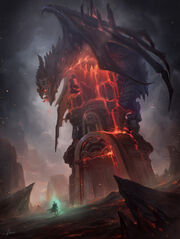 The Hour of Twilight.

Assault on the Ruby Sanctum

An unknown, sinister force took control of the Ruby Sanctum and heroes of Azeroth are tasked to enter the lower part of Wyrmrest Temple, go through a portal and destroy Halion.

Alexstrasza summoned for a meeting, where for the first time blue dragons were invited. The place of meeting was at Wyrmrest Temple. Korialstrasz remained in Ruby Sanctum while Alexstrasza met her sister and representatives of the blues, Kalecgos and Arygos atop of the Temple. The meeting was interrupted by an attack of twilight dragons in service of the Twilight's Hammer. Moreover, an explosion arose from the basement.[7] It was revealed that Korialstrasz had betrayed the Dragonflights. After this, Alexstrasza shattered it in a fit of rage.[8]

The Aspects then abandoned the Temple, only to be retaken by the Twilight Father and his followers. It was also there where Arygos's sister Kirygosa was held captive and Chromatus's body was brought. The monstrous being was then resurrected by magic from the Nexus. Thrall managed to unite the Aspects and the Dragonflights and Kirygosa escaped from the Temple and told everything she knew. The Aspects attacked the Wyrmrest Temple, however, Chromatus was powerful and Nozdormu urged to retreat. Timeless one said some wise word and together they attacked and were able to defeat Chromatus and took back the Temple. While there, they searched the Temple for the Twilight Father's body, but according to Kirygosa who would always know his face, he was not here. The Aspects thanked Thrall and enable him to leave for Maelstrom.[9]

Wyrmrest Temple is the location of the first part of the Dragon Soul raid, the final battle against Deathwing and the Twilight's Hammer.

Adhering to their tradition to meet when the two moons of Azeroth were at a particular cycle the former aspects meet at Wyrmrest Temple. At the end of the brief meeting Alexstrasza, along with Ysera and Nozdormu, decided that they would officially end the Accord one month from now, to the shock of Kalecgos.[10] The former aspects would later return to the temple at the request of Kalecgos, who used an artifact from Watcher Tyr to remind them about their past battle against Galakrond and that they didn't need to be aspects to help safeguard the world. Agreeing with him, the other three decided to continue their affairs in protecting Azeroth. They also swore Kalecgos to secrecy about the nature of Galakrond, as they did not want anyone to follow in his dark path.[11]

The Wyrmrest Temple is once again a meeting place for dragons and the death knights of the Ebon Blade visited them during the Burning Legion's third invasion in order to learn something about Kyranastrasz.

Wyrmrest is also visited when speaking with Chromie who sends the adventurers into the future Wyrmrest.[12] 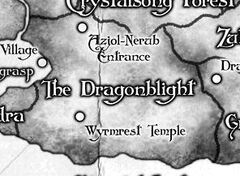 Wyrmrest Temple in Lands of Mystery.

Wyrmrest Temple is set in the Dragonblight's southwest and this structure dominates the landscape for two reasons. First, it is massive and impressive. Second, its inhabitants, past, and present. The Titans built the temple, though no one alive knows why. It looked out upon the dragons to the north and the ocean to the south. The Titans have long since vanished and now the temple occupants are dragons: blue dragons more specific. It seems they monitor the Dragonblight, see to the needs of those dragons arriving here to die, and commune with the spirits of those dragons already departed. They allow non-dragon visitors up to the temple but not within, so its internal architecture is a mystery. If it is half as impressive as the exterior, this is the most beautiful building in all of Northrend.[13]

The Temple of Storms in the Storm Peaks is similar to Wyrmrest Temple, especially when considering that both were made by the Titans.[14]

As such travel forms and mounts may now travel within.