Wyvern riders,[1] also called wind riders,[2] are a type of windrider that consists of an orc or tauren mounted on a flying wyvern.

The sentient wyverns of Kalimdor were eager to ally themselves with the shamanistic Horde. Impressed by the orcs' commitment to honor and victory, the wyverns allowed the orcs to ride them into combat against those who would disturb the tranquility of Kalimdor and its denizens. The wyverns, who share a common ancestry with both dragons and gryphons, use their powerful claws and razor-like fangs against both airborne attackers and ground troops, while their riders may hurl envenomed spears at the enemy.[1]

Wyvern riders carry envenomed spears that have been coated with the lethal venom from Stranglethorne's giant jungle snakes. When pierced by these spears, the riders' enemies are weakened and slowly eaten alive as the vile poison courses through their bodies.[1] 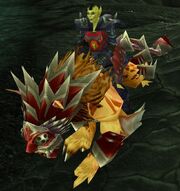 Wyverns serve as the taxis between most Horde flight paths, and the flight masters who run them have the title "Wind Rider Master". Wyvern mounts called 'Windriders' can be bought as flying mounts in Shadowmoon Village. Therefore, any Horde player can become a wyvern rider of sorts.

Elu and Agadai are both Wind Rider Apprentices, and the former gives a quest called Wind Rider.