Xal'atath, Blade of the Black Empire

This article is about the legendary artifact in Legion. For its lore, see Xal'atath. For its quest item version, see

[Xal'atath, Blade of the Black Empire].
Not to be confused with

Xal'atath, Blade of the Black Empire is one of the artifacts used by shadow priests in World of Warcraft: Legion. Equipping it will automatically place

[Secrets of the Void] in your off-hand.

This item is a quest reward from 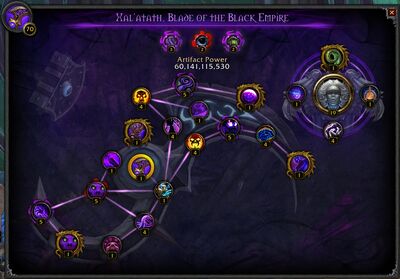 Hidden trait: Xal'atath will occasionally whisper to you, similar to other Old God-themed weapons.

Upgraded: Embrace of the Old Gods

When equipped, certain zones, characters, and events can trigger Xal'atath to say or whispers things to the player, like the

Kaivax's use of the quote "So much death here, so much power." in relation to the Crucible of Storms under the Shrine of the Storm, which is part of N'Zoth's body, in combination with the Ny'alotha quote is "The nearness of the Void here is comforting. I was used in a sacrifice of many creatures in a place like this. Every death brought us closer to the complete corruption of this world." and her mentioning in the quest