For the boss encounter, see Paragons of the Klaxxi.

Xaril the Poisoned Mind was one of the Klaxxi paragons. He was an expert alchemist who specialized in using poisons and explosive compounds. He was awakened by the Wakener to combat the sha threat. Along with the rest of the Klaxxi, he later sided with Garrosh Hellscream, who had obtained the Heart of Y'Shaarj, against the Alliance. He fought in the Underhold during the Siege of Orgrimmar, where his brethren and him were eventually killed. 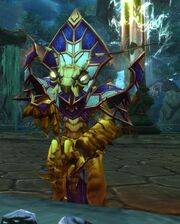 So many wonderful varieties.

You will likely become violently ill. Perhaps you will even lose an antennae or two.

But do it long enough, and you will become quite used to it.

Klaxxi enhancement
I have coated your weapons with a special serum. Use it to inject your enemies. Too many injections, and their systems will overload.

Siege of Orgrimmar
Main article: Paragons of the Klaxxi#Quotes

Xaril appears as a legendary card for the Rogue class in the Whispers of the Old Gods expansion for Hearthstone. His flavor text reads: "It's basically your own fault if you go around drinking weird green potions handed out by creepy mantid dudes."