Xe'ra (pronounced ZEE-ruh),[3] the Light Mother[1] (also spelled Lightmother)[4] or the Mother of Light,[5] was the prime naaru (or the naaru prime),[6] one of the first naaru to be forged during the great ordering of the cosmos. For millennia, she led a crusade against the Burning Legion as leader of the Army of the Light.

She sent her core, known as Light's Heart, to Azeroth during the Legion's third invasion, in an attempt to aid the mortal forces fight off the invading demons and find the subject of her prophecy, Illidan Stormrage.[7] She was made whole again during the invasion of Argus by Azerothian forces, but Illidan rejected her and destroyed Xe'ra. 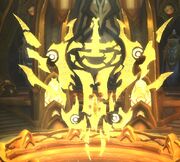 Xe'ra was one of the first naaru forged during the great ordering of the cosmos,[8] and was allegedly "at the Beginning, when mortal life itself was but a distant dream", when she mentioned that she was among those who failed to stop the Legion's rise.[9] After the fall of Argus, the Genedar split into two separate vessels. The draenei's finest warriors followed the prime naaru Xe'ra aboard the Xenedar as the Army of the Light in an eternal war to bring about the Legion's end. Since then, other survivors of the Burning Crusade have joined the ranks of the Lightforged.[10]

Xe'ra didn't want the Army to know that naaru could fall to the Void, something they would only learn on Mac'Aree with L'ura.[11]

A Thousand Years of War

Even though Alleria Windrunner had been advised against it, she started delving into the Void, and left the Army of the Light under the tutelage of Locus-Walker. She would eventually return to the Xenedar, and aid the Army against the Burning Legion. Xe'ra tried to convince her to abandon her endeavor and keep to the Light, but Alleria refused. Although X'era was eventually dissuaded by Turalyon from inflicting harsher punishment, and despite Alleria's arguments that they were not enemies despite their different affiliations, she nevertheless had Alleria imprisoned aboard the Xenedar, at least until she accepted "the path of righteousness" once again.[1]

Xe'ra focused all her efforts into aiding the champions of Azeroth and sent her core, referred to as Light's Heart, to aid them, though this action weakened her.[1]

Order champion's concisousness projected to Xe'ra's astral presence at the "crucible of creation" in the Great Dark Beyond.

Light's Heart cut a swathe through the Felstorm above the Tomb of Sargeras, and radiated enough power that Silver Hand scouts could feel it coursing through their body. It fell near the coast of Suramar where it was first found by gilgoblins, who brought it to a sea giant, from whom an order champion sent by Khadgar would retrieve it. A message from High General Turalyon revealed that Light's Heart had been sent as the Army of the Light's last resort as they were fighting their final war against the Burning Legion. He then asked for the core to be handed to Prophet Velen.

At the Exodar, Velen recognized Light's Heart and stated that it could only be unlocked by another naaru in Xe'ra's line, of which O'ros was the last remaining. For that very reason, O'ros was killed during the Battle for the Exodar by Rakeesh, who did not want Velen to obtain the information contained with the core. However, the Tears of Elune still managed to open Light's Heart at Khadgar's suggestion.

Upon doing so, the spirit of the order champion was sent to Xe'ra. There, she told them about her prophecy regarding Illidan Stormrage, the "child of Light and Shadow", destined to end the age of demons. Through Light's Heart, she would later continue to communicate with the champion charged to protect her core and try to guide them towards "redemption", as in her eyes the champion's participation (if applicable) in the death of Illidan at the Black Temple was a terrible mistake. Xe'ra claimed that once their work of reuniting Illidan's body with his soul was done, her final task would be complete and she would be lost to the Great Dark Beyond.[12] However, after Illidan was made whole again, Xe'ra was not lost.

Turalyon, Alleria, and a champion from Azeroth later traveled to the Xenedar, which crashed in Krokuun, where they found the gravely injured Xe'ra and teleported her to the Vindicaar.[1] Light's Heart was placed back at her center, and Xe'ra awakened. She asked Illidan to join the Light and fulfill his destiny, but Illidan refused. Xe'ra thus forcefully bound Illidan in chains of light and attempted to fulfill her own prophecy by force. The demon hunter however broke free, and destroyed Xe'ra. An enraged Turalyon accused Illidan of dooming them all and attempted to strike him down, but Illidan blocked Turalyon's blow and told him that his faith had blinded him. According to Illidan, there was no chosen one, only they could save themselves.[2] Velen would comment that her loss was a blow and condemned Illidan killing her along with Xe'ra's attempting to force destiny upon them.[4] Artificer Rommul would also say Xe'ra's loss was his most troubling experience in the conflict thus far.

The shards of Xe'ra were collected by Velen, who swore that the Light did not die with her and shone in each of them.[13] Xe'ra's light was then safeguarded within the Netherlight Crucible.[14]