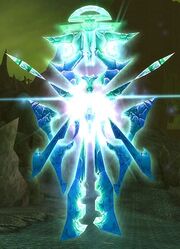 Xi'ri, at the entrance of the Black Temple

Xi'ri is a naaru located at the beginning of the path to the Black Temple in Shadowmoon Valley.

Xi'ri was mentioned by Khadgar's Servant during the guided tour of Shattrath City, as the naaru who took the Sha'tar's war effort against Illidan Stormrage directly to the Betrayer's doorstep. In the final quest in the attunement chain, Xi'ri gives the

[Medallion of Karabor] to the player after doing battle with Illidari demons, after a long quest chain involving Akama at the nearby Warden's Cage.

During the final battle against Illidan, Xi'ri cast spells of protection on its allies.[1]

<The light surrounding Xi'ri pulses blue. The naaru welcomes you as an ally in the field of battle.>