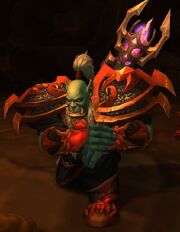 Xorenth is an orc that appears in Ragefire Chasm as a quest giver alongside Commander Bagran, leading an investigation into the Dark Shaman and their goals. He is later seen as a member of the Dark Shaman in the Secrets of Ragefire, implying that he was later converted to their side or had been from the beginning, manipulating young adventurers into slaying the unworthy members of the organization. When the Gob Squad arrives, he is seen directing laborers in some sort of experimentation chamber involving proto-drake eggs. He accuses them all of being unworthy of the pure Horde, however, and after his guards are slain, he enters the fray.