“Great was the Old One, and terrible was His wrath. He consumed hope and begat despair; He inhaled courage and breathed fear.”

Y'Shaarj (pronounced YAH-Sha-Raj)[2] was the most powerful and wicked of the Old Gods,[5] eldritch horrors who threatened the world of Azeroth millennia ago. Y'Shaarj was the only one of the four Old Gods to be killed by the titans, and its heart was imprisoned in a vault beneath the Vale of Eternal Blossoms. The heart later found and restored by Garrosh Hellscream, who then transported it to Orgrimmar's Underhold. The heart was used by Garrosh to increase his power during the final battle of the Siege of Orgrimmar. As Garrosh was defeated, the heart and its power dissipated, leaving nothing left of Y'Shaarj's corrupting influence.

Y'Shaarj was also known as "the seven headed one"[6] or "the beast of seven heads",[7] and is said to have inhaled courage and breathed fear. When it died, its last, terrible breath manifested as the seven prime sha — Anger, Hatred, Violence, Fear, Doubt, Despair and Pride. Y'Shaarj is fervently worshipped by the mantid, a race of violent, expansionistic insectoids who dwell in the lands west of the Serpent's Spine wall.

Y'Shaarj serves as the posthumous antagonist in Mists of Pandaria.

Before the ordering of Azeroth

Y'Shaarj in the center of ancient Kalimdor during the reign of the Black Empire.

Y'Shaarj was the most powerful of the four Old Gods to plummet into Azeroth from the Great Dark Beyond, and the greatest bastion of the Black Empire was built around its gargantuan bulk.[5]

When the godlike titans arrived to shape and order Azeroth, they created the titan-forged to battle the Old Gods and their enslaved elemental servants. Though the titan-forged were successful in defeating and imprisoning the Elemental Lords, the titans realized that Y'Shaarj would prove too great a challenge for them; as the titan-forged approached the temple city that lay at the heart of the Black Empire, Y'Shaarj twisted their thoughts and drew out their darkest emotions. Thus, Aman'Thul, the Highfather himself, reached down through Azeroth's skies and heaved the Old God from the surface of the world. At that moment, the massive bulk of the Old One was ripped apart, and its death rattle caused entire mountains to shatter and hundreds of titan-forged to be instantly obliterated where they stood.[8]

Aman'Thul had inadvertently ripped open a wound in Azeroth's surface, and the world-soul's arcane lifeblood flowed to the surface. It was then that the Pantheon realized that the Old Gods had entrenched themselves too deep to excise without destroying Azeroth itself, and instead they resolved to imprison the remaining three Old Gods rather than killing them outright.[8]

As the titan-forged known as Highkeeper Ra made his way to establish the stronghold of Uldum in the southwestern reaches of Azeroth, he came upon the remains of Y'Shaarj, the largest intact part of which was its twisted heart. Ra resolved to seal the heart in a subterranean vault below the Vale of Eternal Blossoms, in the hope that studying it would help the titan-forged gain a better understanding of the Old Gods and the Void. Ra then charged some of his mogu followers to watch over the vault and the surrounding lands, before continuing west.[9]

After the war between the aqir and the trolls, many years after Y'Shaarj's death, a colony of aqir congregated around the southern areas of Azeroth. Though they did not know it, they were drawn to the lingering presence of the Old One and were soon warped into a new race, known as the mantid. The mantid continued to worship their Old God masters for millennia to come.[10]

The Heart of Y'Shaarj in its Vault.

At the command of Garrosh Hellscream, goblin engineers began excavations in the Vale of Eternal Blossoms to find a mysterious artifact, but found more than they bargained for. With the mining crew terrorized by an ancient power in the depths, adventurers were called in to retrieve whatever remained of the excavation. After clearing the mine full of the Blood of Y'Shaarj, adventurers blasted their way into an underground room with an Echo of Y'Shaarj. Inside the Vault of Y'Shaarj was found a chest, suspended from chains, which contained the Heart of Y'Shaarj.[12]

Garrosh Hellscream later fully restored the Heart of Y'Shaarj using the pools of Pandaria. Fortunately, the whole God was not resurrected.[13] The heart was taken to Orgrimmar, and placed in the Underhold, Garrosh's new seat of power.

After Garrosh's defeat, the Heart has suffered a failure and the Fading Breath briefly remained on the floor of the Underhold, then faded from existence, ending the life, influence, and corruption of Y'Shaarj. With every Sha Prime and its heart dead, nothing remains of its power.

Upon reaching exalted with the Klaxxi, a faction of mantid that have turned against their queen, Kil'ruk the Wind-Reaver will tell the player the story of the mantid's origins and Y'Shaarj.

Wakener, your deeds have earned you the trust of the Klaxxi.
You are to be rewarded. Walk with me.
We mantid are an elder race. The pandaren you associate with - they are but children. They have their role to play.
Each cycle, our young swarm their walls. The pandaren slay the weak. The strong return.
With each generation, we grow ever stronger.
Before your history began, our empire was vast. We shared this world with our sister kingdoms, Ahn'Qiraj and Azjol-Nerub.
Our Gods were many, and powerful. We mantid worshipped the seven heads of Y'shaarj[sic].
Great was the Old One, and terrible was His wrath. He consumed hope and begat despair; He inhaled courage and breathed fear.
When the usurpers came - the ones you call "Titans" - Y'shaarj was destroyed.
His last terrible breath has haunted this land ever since, but the shadows he left behind are mere whispers of his former glory.
I tell you now, because you have earned this warning.
Your gods are not our gods, outsider.
If the Old Ones ever return, we mantid will once again stand by their side.
The wisest among you will do the same.

This story foreshadows the events that took during the Siege of Orgrimmar, as the Paragons of the Klaxxi ultimately sided with Garrosh Hellscream, who managed to uncover the Heart of Y'Shaarj and even wield its power to some extent. 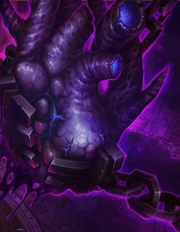 During the fight against Garrosh Hellscream in Siege of Orgrimmar, players can periodically hear the whisperings of Y'Shaarj coming from its reanimated heart.

You can also hear whispers from

Y'Shaarj's seven heads may explain why hydras such as Aku'mai, also multi-headed creatures, are associated with the Old Gods.

Cataclysm introduced a new item, the

[Puzzle Box of Yogg-Saron], which whispers to the player on each attempt to open it. While most of these (extremely vague and cryptic) whispers are thought to describe N'Zoth, one describes a "black goat with seven eyes", which may refer to Y'Shaarj due to the similar theme of seven eyes/heads. As shown in Hearthstone, Y'Shaarj indeed has seven eyes and goat-like horns (though it should be noted that Y'Shaarj is said to have had seven heads, suggesting the card is only showing one of them).