"What's a yaungol?"
"Know what a yak is?"
"Of course."
"Imagine one of those walking around on two feet, only angrier."
— Yoona and Zengi

The yaungol are a race of yak-like humanoids who are the ancestors of the tauren and taunka. After years of living in the Townlong Steppes, they have been pushed out of their homeland by the mantid, and are aggressively trying to make a new home for themselves in the Kun-Lai Summit.[1]

Sometime between 12,200-12,000 years before the opening of the Dark Portal, the burly race known as the yaungol roamed central Kalimdor, living in peace with nature under the tutelage of the demigod Cenarius. Eventually, however, the yaungol grew weary of having to share their hunting grounds with the nearby trolls, and, against Cenarius' wishes, journeyed south in search of new territory. They soon reached the borders of the mogu empire. The mogu emperor at the time, Qiang the Merciless, enslaved the yaungol and ordered his flesh-shapers to enhance the bovine race's strength, savagery, and intelligence. For generations, the yaungol suffered under the mogu, until they joined the other slave races in a rebellion that succeeded in toppling the empire.[2]

Though they had regained their freedom, much of the yaungol's culture had been lost due to strict mogu laws forbidding them from preserving their oral storytelling traditions. Some of the yaungol clung to incomplete myths of the benevolent Cenarius, while others wished to abandon their past and forge a new destiny by force. The disagreements grew heated, and many yaungol left for the north with the intention of returning to a life of harmony with nature. The more nomadic tribes traveled across the entire continent, settling in the frozen lands near the Storm Peaks, where proximity to titan-forged machinery gradually transformed them into the taunka. Another group returned to the central areas of Kalimdor, where they reunited with Cenarius. Those who studied with Cenarius learned the druidic magic of the natural world, while others mastered the art of wielding shamanic powers. The energies of the Well of Eternity warped these central yaungol into a new subspecies, known as the tauren. The last group remained in the areas around the Vale of Eternal Blossoms, but due to repeated conflicts with the other liberated slave races, these yaungol decided to settle in the lands west of the Serpent's Spine wall. There, the constant threat of the ruthless mantid combined with widespread infighting caused their culture to grow more warlike and savage than that of their northern cousins.[2]

The taunka, tauren, and yaungol retained some contact with one another for many years, but the Great Sundering finally shattered the connections between the tribes.[2]

Recent mantid attacks have led many yaungol warlords to the realization that the best hope for their people was to breach the wall and seek new homes in the safer environs of the Kun-Lai Summit. The Shado-Pan, outnumbered and already straining to fight off mantid assaults and a sha uprising, were unable to stop the incursion. The yaungol horde has arrived in Kun-Lai, bringing war with them.[3] Some yaungol fell under the influence of the sha, making them even more violent and brutal than normal.

Eventually, the pandaren fended off the yaungol invasions. However, according to Min, the yaungol are survivors: despite their setbacks, they will learn from the event and their culture will endure.[4] 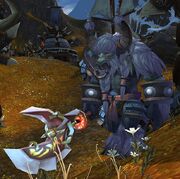 Only the strongest, most courageous, most resilient of yaungol may lead the tribes. These traits are of the highest qualities in yaungol society and are expected of all yaungol leaders. However, with the constant threat from the mantid to their south, the yaungol cannot afford to lose a single warrior in an internal struggle for power. A surprisingly civilized solution to this problem has been put into place. When a dispute arises between them, they fight one another with blunted weapons until one yields or passes out. Similarly, new leaders are chosen in ritual combat. A yaungol who appears to take the place of chief must place his family banner and fight any who would challenge his authority.[5]

Yaungol fire-keepers ritualistically set themselves ablaze to emulate the ascension of Ordos and cast enchantments and prayers to ease his pain. Ordos was once a shaman of the yaungol who sacrificed himself to the flame, following the promises of the Fire Lords, in order to become a demigod.[6]

Dwelling in the dangerous Townlong Steppes and forced to survive in the harsh terrain since the Sundering, the hardy yaungol were forced to adapt, weaponizing local supplies of oil and developing their own aggressive culture.[7] Burning oil is the cornerstone of yaungol warfare. In the days of their greatest warriors, this weapon was more deadly than magic. This burning substance would scar foes, scorch lands, burn what the cover provided by trees, and could rout even a terrifying mantid assault. It is also an old tactic of the yaungol to light more campfires each night than people they have. In this way, enemy spying in the darkness would assume larger numbers of yaungol existed, while their true positions and numbers remained masked.[8]

The race is constantly on the move, establishing short-lived "Fire Camps" in areas of abundant natural resources (specifically oil, which is collected through mobile derricks, and game) before moving on. Where to set up camp, how long to stay, and when to move out remains the sole discretion of the Chieftain.

In combat, the yaungol prefer to hit hard and fast, making heavy use of cavalry to flank and harass the enemy while hard-hitting infantry assaults the weakest parts of the enemy line. Fire sorcery and flaming siege weapons back this initial assault. Yaungol are known to retreat as quickly as they charge, always reading the enemy and only fully committing their forces to sure victories.[9]

Brann Bronzebeard believes that the tauren were created by a bovine Wild God,[13] and since the yaungol are the ancestors of the tauren it would stand to reason that the Wild God in question actually created the yaungol. It may have been Niuzao.